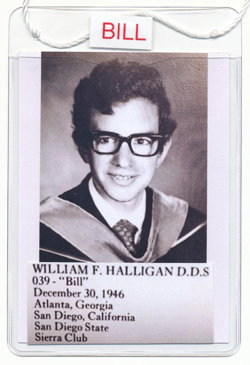 [dropcap]W[/dropcap]hen I received the phone call from a USC dental school classmate inviting me to a 40 year reunion, I was something way short of excited. I hadn’t stayed in touch with more than a couple of the guys—and I use that term generically to refer to both male and female-type dentists—and I wasn’t sure I wanted to see the results of 40 years of leaning over a dental chair and listening to the high-pitched whine of a handpiece.

My lack of enthusiasm may have also been because only a few short months before I had attended my 45th high school reunion. I did manage to reconnect with a couple of old friends from back in those distant days of the 1960s, but on the whole it was a pretty boring evening. I dragged my wife, Andrea, to the gathering and she was less than pleased with the whole affair.

But after a little consideration, we made relatively short trip to Anaheim for an evening with many of the old gang (note to self: Never drive from San Diego to LA on a Friday afternoon. You might be able to make it faster on a bicycle). And the result? Fabulous.

So it’s 40 years on. Some of us are retired, though most are not. Some have sold their ownership in the practice, but are still working in the practice as associates—employees of the new owner. A few of the guys have passed on. But on the whole there was a good turnout with more than half the old class there for the reunion.

Now, it was apparent that a lot organization and planning went into the event. Certainly much more than went into my high school reunion. There were shared emails for several months. There was a nice banquet room at the Hilton Hotel next to the Convention Center. There was a bar and a good spread of snacks to eat. All of us had name tags with—what else?—our photo from the senior year book. I didn’t realize I looked like I was 14 years old when I graduated. It’s no wonder that patients back in 1972 asked, “Are you old enough to be doing this?”

And now, 40 years later, we’ve all found our way somehow. Most of us have put on a few pounds and lost a little—or a lot—of hair since 1972. I think we’ve all suffered some hearing loss. It sure was hard to hear each other talk in that banquet room! I wonder how many stories could be told. Has it been a “long, strange trip,” like the Grateful Dead song says? I got the feeling, hanging out with all these guys again that for some it has been exactly that and for some neither particularly long nor strange. Just a steady path to a great career. Furthermore, for most there is still a passion for dentistry.

Looking around the room I couldn’t help but wonder what a vast storehouse of knowledge and experience is locked up in all our heads and hands. I know what it’s like to be a new graduate: bursting with confidence, the idea that you can do almost anything in dentistry. And then the gradual realization that there is still much to learn. And then continued learning not just for a few years, but for decades.

I was left with a feeling of some regret, a feeling that I should never have let all those old connections go. I was left with the knowledge that USC class of 1972 is simply a great bunch of guys.

Here’s what I know about USC dental school’s class of 1972: we worked darned hard to get through it; we worked hard to achieve what we accomplished in the years since; we’re a mostly down-to-earth and fun group; as a group we carry ourselves with a certain quiet and sure dignity; we’re successful, we know it, and we don’t really have to prove it. I sure wish I could bottle that up and pass it along to a younger generation of dentists only now trying to figure out things we all did a long time ago.

What could we tell the young dentists? For those younger guys and ladies still trying to figure out how in the world you’ll ever pay off those student loans it’s a mixed message. Time is fleeting. The 40th reunion came around much faster than I would have imagined. You need to get with it and grow the practice.

But at the same time, be patient. Don’t run out and buy the car of your dreams (or house of your dreams, etc. etc.) too soon. Your abilities will grow. Your experience will accumulate. You can be an overnight success in about seven years. You won’t have a mature practice until you’ve paid dues way beyond graduating from dental school.

For me, I know a lot of time has gone by since I connected with the class of 1972. But it’s not too late, even now. There’s a good deal of camaraderie left to share, old memories and new ones. Today’s technology makes it almost easy. This week we’ll all share addresses, phone numbers, email addresses. Here’s to staying in touch a little better before the 50th (whew!) comes along.