A Mr. PD emailed me after reading some of the articles on this website in hopes that I might be of some help. He described symptoms of ear pain, jaw pain, Jaw joint noises, especially on the left, limited opening of the jaw and vertigo. When I replied to his email, I asked whether he had CT scans or MRI of the temporomandibular joints (TMJs) and he said he did and could forward them to me.

I let him know that if he forwarded the images to me, I could write a report of radiographic (x-ray imaging) findings and that I could also be available for a phone consultation.

The patient sent several photos and x-ray images and I’ll just review a few of them here, but there should be enough to give you a good idea how a remote consultation can go.

After I show you the images as they are displayed on a computer screen, I’ll also highlight the various x-ray findings so that my report to the patient becomes clearer.

By the way, the patient wrote that his dentist said the images were normal. 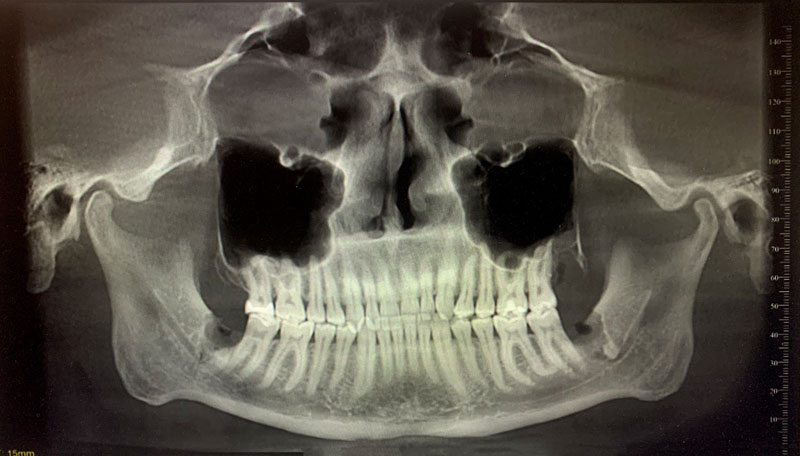 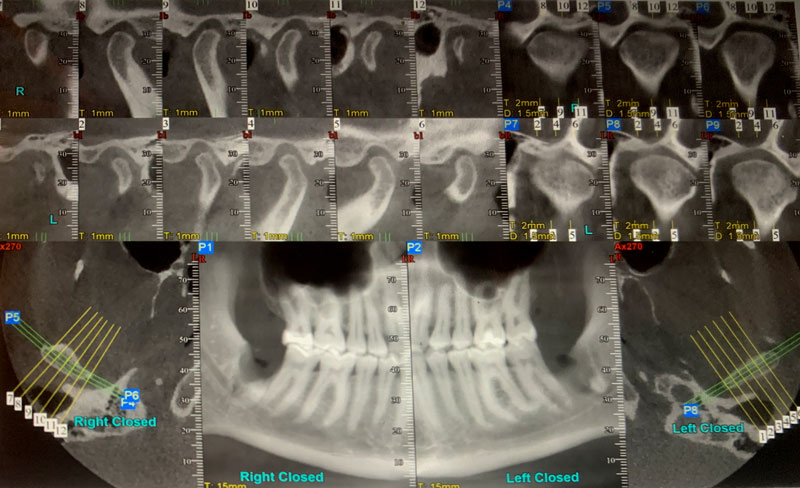 My report and remarks:

Note: I would usually comment on cervical spine (neck x-rays) also, but in this case, the images I was forwarded did not include a good series of lateral cervical spine.

The most obvious finding on your images is the short ramus and small condyle on the left side. The development of the ramus and condyle on the right side, on the other hand, appears to be normal. When I see that kind of asymmetry, that is, one side of the jaw significantly smaller than the other, the cause is usually a childhood (age 15 or younger) head trauma. I suspect that for you that must be the case.

In addition, the left condyle is displaced back toward the ear, and there is less disc space than normal. The disc is probably displaced anteriorly (forward), but it would require MRI to verify. I can see that the right condyle is also slightly displaced, but not as much as the left. 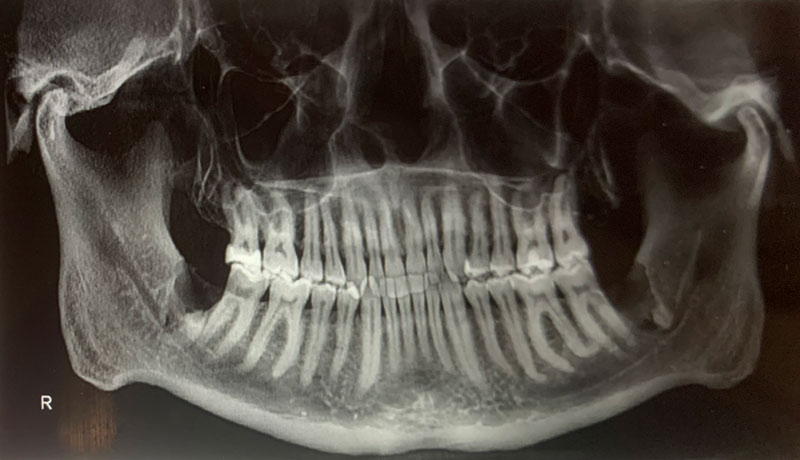 The part of the temporal bone—the articular eminence—where the condyle is nearly touching, shows thickening in response to years of stress on that area.

This is a sign of extreme clenching and possibly grinding of the teeth. It is more prominent on the right side, and the teeth on the right probably hit harder than the left whenever you close.

There is a pronounced deviated septum. Although your airway appears to be normal, the deviated septum could lead to snoring if not actual sleep apea.

Mr. PD wrote back and stated that I was “spot on!” He had indeed had a serious Moped accident at age 15 with injuries to head and neck. He did have a deviated septum but had had surgery to correct it after the images were taken. He also knew that the oral surgeon had left behind two fractured root tips but had elected to leave them in place because of proximity to the nerve.

He also acknowledged the bite feeling off, with especially hard contact on the right; in fact he had broken an upper right molar shortly before the images were taken and the tooth had been crowned and that the crowned tooth was still hitting hard when he closed.

After exchanging emails, I then had a 40-minute phone conversation with the patient. He told me about various things that had already been tried, including bite adjustment by his primary dentist and placement of a lower orthotic by another dentist. The dentist who made the orthotic, Mr. PD claimed, did not want to see the CT scans of the jaw and did not rely upon them in making the orthotic. So far, he said, nothing had helped, in fact the bite adjustment seemed to make his symptoms worse. He showed me a picture of the orthotic in his mouth with teeth closed on it. What was obvious in the photo was that the orthotic moved his lower jaw even further to the left which, of course, could only worsen the strain on the damaged left joint.

Although I told the patient that I did not want to disparage either dentist, I did think a 2nd opinion was called for and I referred him to a colleague whom I believe can do a more thorough assessment including history and physical exam, take a careful look at all CT scans, and also discuss a long-term plan including possible orthodontics to correct the obvious asymmetry of the jaw.

I told the patient that I don’t believe any short-term fix will be adequate.

He emailed me back a couple of days later to let me know he has made an appointment with the doctor I recommended.

Now, even though I did not meet with the patient personally, I think it is clear that quite a lot can be accomplished through just reviewing good x-ray images, history, and symptoms and following up with a phone call. After the fact, I can see that conferencing through Zoom or similar video format could have been even more valuable and it is something I will add in future consultations of this kind.

The patient discussed above, referenced as Mr. PD, was age 33 when the radiographic survey was done. Up until I reviewed his imaging, his facial asymmetry had not been noted and therefore had not been considered as a cause of any of his symptoms, Dentists had noticed bite problems and some TMD symptoms. And these problems had been present for more than 15 years.

In my mostly TMD focused practice, I had seen facial asymmetry caused by unequal ramus length many times. But because my practice was clinical and not academic, I did not keep statistics on what percentage of my TMD patients had this kind of asymmetry. I believe the frequency is rather high and could make for an interesting statistical study.

Mr. PD, it is worth mentioning, also suffered a neck injury as a result of his moped accident at age 15. This is a complicating factor, as his neck injury may have led to some of his symptoms including vertigo, headaches, and even jaw clenching due to the chronic neck and shoulder pain.

But back to mandibular growth and its relation to overall facial development—especially of the maxilla– an article in the Japanese Dental Science Review (Volume 49, issue 4, Nov. 2013, pp. 139-150) by Mizoguchi, et al, states that growth of the biological cartilage lining the mandibular condyle is a growth center for the mandible as a whole and is a key to the development of the craniofacial complex, the maxillofacial skeleton and TMJ function.

In an article entitled ‘Posttraumatic Mandibular Asymmetry Presenting in a Young Adult’ (Sheikhi, et al, Radiology Case Reports, March 2017, pp. 73-77) the authors state, “One of the most common sites of injury of the facial skeleton is the mandibular condyle. However, it is the least diagnosed site of trauma. A trauma to the mandible and specifically to the condylar zone during childhood, may lead to asymmetry of mandibular bilateral distortion, which is usually manifested in the second decade of life when the etiology is unknown by most people…Growth and development of the jaw and occlusion depend on integrity of the condyle to a large extent. Although condyle of the mandible is one of the common sites of trauma to the facial skeleton, it is usually the last part to be examined in the case of head and neck trauma.

“Trauma to the condylar zone during childhood may lead to discontinuance of its development and the impaired function thus in most cases is the trauma is not diagnosed correctly. If the development of the condyle is being stopped because of trauma, due to the short ramus, asymmetry will be found, and the chin will be deviated toward the affected condyle.

“This case showed that since causing different problems in adulthood, diagnosis of trauma to the condyle in childhood is very important. In addition, correct diagnosis of the type of asymmetry and its etiology are necessary because of completely different orthodontic and surgical treatment plans, and the maxillofacial radiologist plays and important role in diagnosing all treatment in this field.”

Most researchers in the field of growth and development refer to “childhood trauma,” and yet when we examine the timing of the growth spurt of the craniofacial complex, I believe we need to extend our definition. The peak period of growth in males is usually stated as 14.4 years of age on average. And yet, in an article in Scientific World Journal, (2014, article ID 301501), a Danish study by Bjork showed 3 mm of mandibular growth between the ages of 16-17 for most boys. Therefore, damage to the cartilaginous growth center of the condyle as late as age 16 could cause discontinuance of mandibular growth on the injured side.

How can the general dentist become aware of this kind of ramus length discrepancy in his patients? An article in The Angle Orthodontist (2006, 76, pp. 388-393) examined whether the use of panoramic x-rays in the dental office might be a reliable way to spot these problems of unequal ramus length. In a review of a study entitled, “Validity of Panoramic Radiographs for Measuring Mandibular Asymmetry,” by Kambylafka, et al, the subject was carefully studied. Without going into great detail here, I will simply state that the authors found that the panoramic x-ray, commonly found in many dental offices, was consistently unreliable for determining ramus length and for comparing the lengths of the two sides. This was due to inherent unreliability of the equipment itself, and frequent operator error.

Computed tomography appears to be the most reliable means to spot these problems, but there are obvious difficulties with cost, concerns about radiation, and even accessibility. Still, as a general dentist or orthodontist, if signs and symptoms of this kind of asymmetry seem to be present then CBCT would certainly be indicated.

One simple test I did during clinical exams was to place a tongue depressor right to left across the dental arch. This provided an easy way to visualize the frontal occlusal plane. Was it level with the floor, the eyes, the ears, or was it canted (See my previous articles on this subject, for example “The canted plane revisited: One thing you MUST check”). When, as a general dentist, you are treating a young person with a history of head trauma, could a developing asymmetry be spotted early simply by observing the frontal plane in this manner? I don’t know, but it seems worth trying and perhaps a longitudinal study should even be done. When in doubt, just make sure computed tomograms are taken.

When I spoke with Mr. PD, he stated that he had had occlusal adjustments, splint therapy, and DTR (disclusion time reduction, an entire subject unto itself) adjustments done all without success. My opinion is that although his symptoms could certainly be reduced with correctly fabricated orthotics, long term success will depend on orthodontics perhaps including TADS (temporary anchorage devices) or even surgery.

For those interested in pursuing this topic in greater detail, including the differentiation of Type I vs. Type II cartilage, their histology and their role in mandibular growth, there is a wealth of published research available to anyone wishing to do a literature search on the subject. 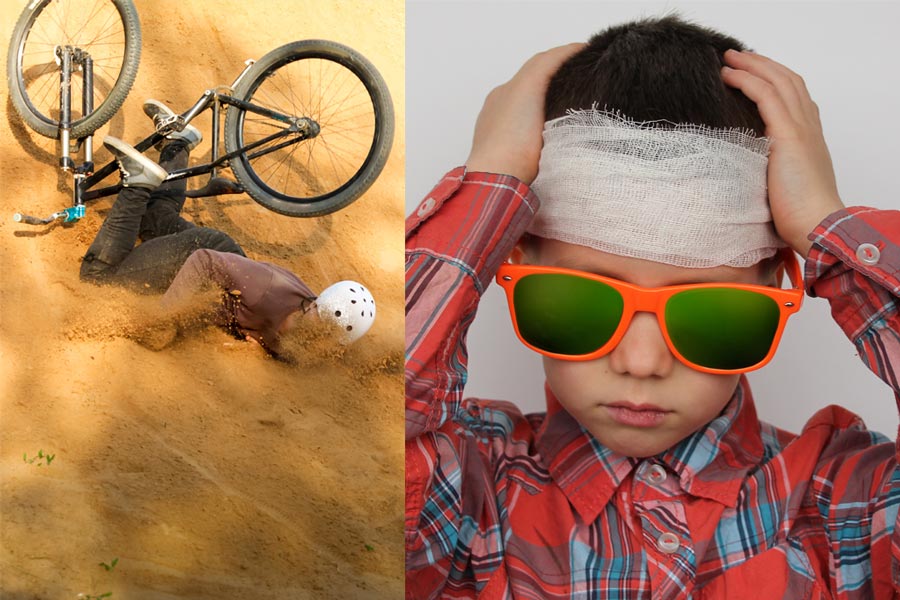 1 thought on “A Virtual TMJ Consultation”