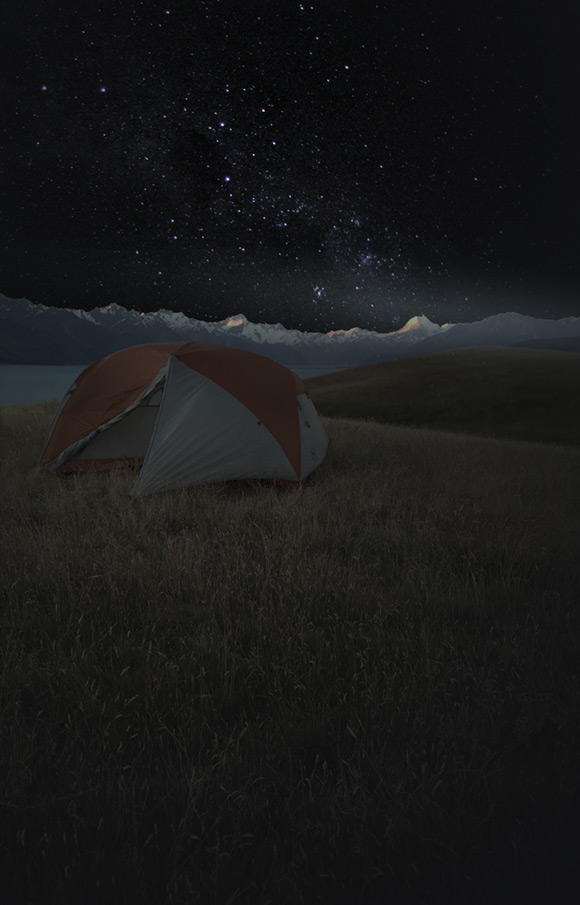 January 2016, at a sheep station on New Zealand’s South Island.

I pitched our tent yesterday on a grassy hilltop just yards from the shoreline of Lake Pukaki; we had a marvelous view of snow covered Mt. Cook a few miles north. Rain was forecast last night, but though the cloud cover was heavy and the weather cold, there was no rain. We slept warm in the peace of our very private space.

Andrea and I, along with a New Zealand based tour group, took a drive to the base of Mt. Cook this morning and we walked to a glacier-fed lake where icebergs floated. Then a cold rain started and we put on our coats. We were out most of the day. Back at the lodge a few hours later we toured the Mt. Cook museum and warmed ourselves with flat whites in the café before heading around Pukaki to the campsite. The dirt and gravel road beside the lake was slick with mud, but when we got to our tent site we found that the rain had stopped.

We had dinner and some fine New Zealand red wine at the sheep ranch then headed up the hill. We walked through tall wet grass and went to sleep in the best accommodation for miles around, our own tent with air mattresses and warm down bags.

Sometime after midnight I awoke and went outside, barefoot and shirtless. The weather had turned mild; a gentle breeze blew off the lake and the sky was clearing. Without ambient light the sky was very dark and the stars came out. And I saw the Southern Cross for the first time.

Andrea was asleep in the tent and I considered waking her, but decided to let her go on sleeping.

The Southern Cross is not a large or even particularly bright constellation. Mark Twain when first seeing it was clearly not impressed. And yet standing in the tall grass on that little hilltop in the perfect quiet beneath the Southern Cross, I was touched as if there were some magic there in four stars describing a lopsided cross pointing the way to the South Pole. 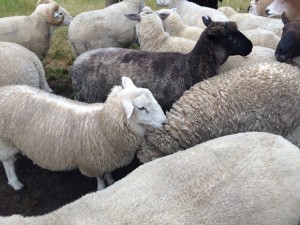 The Southern Cross. I’d watched the old TV series Victory at Sea when I was just a kid, my imagination captured by the RCA orchestra’s rendition of Beneath the Southern Cross, a Richard Rodgers composition like a languid tango. Even in war time, there were moments of calm and warm breezes blowing through the palms. I dreamed of being there—without the torpedoes of course.

And then decades later the Stephen Stills song, The Southern Cross, was released in 1982. The song has been the subject of much debate as to meaning. But Stills himself says that after a divorce (I suspect he’s referring to his break-up with Judy Collins, but they were not married so this is conjecture) he sailed away on the “downhill run to Papeete.” There he found healing and solace in the sight of the Southern Cross. Somehow, he says, there is healing in the Universe and the promise of a coming day; there was a deep knowing that he’d find a love that would endure.

I find I am touched by that. There’s a man I knew, an orthodontist and a good one, someone I had worked with for years. And last year he took his life. Only rumors surround this, but apparently the depression—the crises—involved the breakup of his marriage. If he could reach the point of no hope, no promise of the coming day, no deep knowing that love can endure, as Stills put it, then perhaps there are depths no ray of hope can reach. But I thought of him. Could he have taken that downhill run to Papeete, even metaphorically, and seen that he still has a ship with all its flags a’ flying? Impossible to know, isn’t it? Because his ship, with flags still flying, was a wonderful practice and the love and admiration of the community. To say this is sad is woeful understatement.

Pure dark and quiet on my little grassy hilltop the Southern Cross spoke of the promise of a coming day to me as well and it was a peaceful moment. To the north, the giant of New Zealand, Mt. Cook, still shown faintly white with snow in the starlight. My breathing became very free and easy as if some small part of me was released.

“When you see the Southern Cross for the first time, you understand now why you came this way.” Of all the thousands of songs of lost love, from Margaritaville to All my Exes live in Texas, I think Stephen Still’s song may be the best; it goes beyond the grief to something much deeper. You don’t have to journey ten thousand miles to find the healing of the Universe, but to Stephen Stills all those years ago, it surely helped.

I stood in silence for some time there in the dark. The same stars that gave inspiration to Stills so many years ago were shining bright on a very calm New Zealand night.

I climbed back inside the tent beside Andrea where our promise of the coming day has long since been realized and slept well until the sunrise lighted the eastern sky.

Note: For you geography buffs or astronomers you probably know that looking up toward Mt. Cook from Lake Pukaki you are not going to see the Southern Cross. I took some liberty with Photoshop to put both in the same frame, but in fact the Southern Cross was visible over my left shoulder and behind me. Hope you understand if I took some creative license.