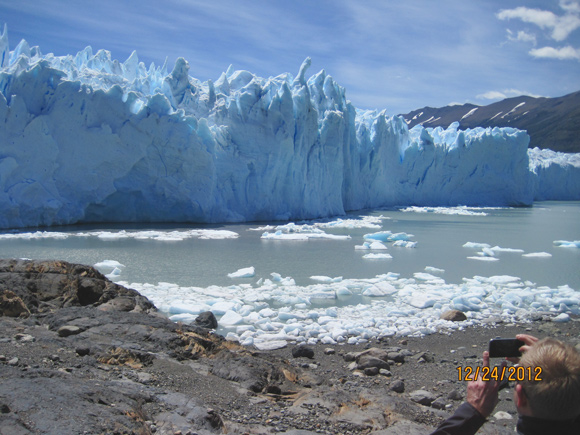 [dropcap]S[/dropcap]anta Claus arrived at the mall in San Diego’s Mission Valley in a virtual tie with the Great Pumpkin last year, and for me maybe that was the proverbial last straw. Or perhaps it was my 1750th family gathering, give or take—and if you count Easter, Thanksgiving and of course Christmas for a few decades, that’s really not all that many. The really early ones, I mean up until I was about 8 years old, were joyful, happy times, even if nobody in the family seemed to get along with my aunt Marion. The later ones though all started to feel like Holly Hunter’s Home for the Holidays.

In any case, while driving in heavy rain on the 405 freeway a few years ago I said to my wife, “There must be something more interesting we could do for the holidays than watching college bowl games and drinking eggnog and rum with Uncle George. How about doing Christmas every four years? Sorta like the Olympics.”

I wondered what she would say. She turned to me with a smile, lighted by headlights from traffic in the northbound lanes and said, “I could go for that. It’s a great idea.”

So the something more interesting this year turned out to be spending some time exploring ice: the great Patagonian Ice Field—the third largest on earth after Antarctica and Greenland.

Christmas Eve just passed found us on a sheep ranch, the Estancia El Galpon, in the far south of Argentina. The ranch served a beautiful holiday buffet and 27 people showed up. Andrea and I were the only Americans. We shared a table with a lovely couple from London (hello Sam and Miriam!). There was also a couple from Germany with two cute and very well behaved towheaded children. There were people from Switzerland, France and Japan. Folks from other parts of Argentina were also there, city dwellers from Buenos Aires who also wanted a little something different for Christmas.

The stereo played some light jazz vocals. I found I didn’t miss my Christmas play list, heavy on the Crosby and Sinatra carols, one little bit. And on Christmas morning it was Bossa Nova Guns and Roses. Now there’s a switch.

Before coming down to Argentina we saw the documentary, Chasing Ice. Whatever your thoughts regarding global warming you should see it. Using time lapse photography, director/photographer James Balog does a wonderful job documenting the rapid retreat of several glaciers, particularly in Greenland.

I had heard that there are major glaciers in South America that are advancing, not retreating, and I wanted to see for myself. One of the world’s largest glaciers is the Perito Moreno glacier in Patagonia. On Christmas Day, we took a boat to the face of the glacier and once on land climbed and walked on the great ice itself.

The Perito Moreno is listed as one of the seven wonders of the natural world. The terminus of the glacier stands 240 feet (on average) above the water. But the ice is not floating. It rests on the lake bottom. The total thickness of ice at the face of the glacier is well over 500 feet. In the 1890s Perito Moreno was not quite as large as it is now. Its icy face stopped nearly a mile short of Lake Argentina (Lago Argentino). By 1917 it had advanced to the shores of the lake and it has remained more or less stable since that time.

A glacier is an imperfect fluid, a river of ice, and each one flows in its own way. Perito Moreno happens to be fairly fast, advancing down the mountain slope at about 3 meters per day. Like a river, the flow is not constant. There are eddies and the edges of the ice river do not flow as fast as the center. But overall, the great wall of ice advances down the mountain slope close to 10 feet every day.

What makes this glacier, or any glacier, advance depends on the complicated interaction of several factors but foremost is the amount of snowfall high on the mountain where the glacier has its start. Accumulated snow, reaching great depth, creates pressure that condenses the snow and the deepest levels condense into ice. It snows high on the Moreno Glacier 300 days a year. Glaciologists figure that the rate that ice is advancing into to lake today is influenced by the snowfall from three years ago. Snow continues to fall heavily and so I think it’s safe to say that this glacier will continue to advance—and calve off into the lake—for at least another few years.

When the giant face of the glacier, two to three hundred feet high, reaches the lake waters, great hunks of ice calve off and icebergs slowly melt on the big lake.

The apparent tunnel in the ice that you can see in the photo above is one of the more interesting features of the Perito Moreno Glacier. Lake Argentina is roughly kidney shaped, with a relatively narrow stretch of water between two main bodies of the lake. As the glacier advances, it periodically bridges that narrow place and completely blocks the channel between the north and south ends of the lake. The north end of the lake has an outlet to the Atlantic. The south end has no outlet of its own. So when the ice block is present, streams feeding that end of the lake cause the waters to rise. Recently, the water level in the south end was at least 30 feet higher than the north end just on the other side of that ice blockage. The blocked southern part of the lake has been documented to rise as much as 130 feet above its normal level. Eventually, the tremendous pressure of the deep water breaks through the ice creating a tunnel. Water continues to flow through causing the tunnel to enlarge and eventually the ice bridge over the tunnel becomes thin enough that it collapses into the water. Imagine a twenty story building falling 220 feet into a lake. Think that might make a splash? YouTube has several videos of a recent collapse of the ice bridge. This one is worth watching. Turn the speakers on.

Since then, the ice advanced again, blocked the narrow part of the lake and the tunnel eventually formed. The photo shows the tunnel through the ice blockage as of December 2012.

Sometimes, the tunnel doesn’t form on schedule and the south end of the lake rises and floods the shore, threatening the park and the forest of trees well above the normal water line. In one recent year, the concern was so great that the military was called in. The Argentine Air Force dropped a number of 800 pound bombs on the blockage of ice hoping to shatter it and allow the water to flow. A witness told me the affect was only a few splinters of ice flying into the air, like a five-year-old child attacking a twenty pound block of ice with an ice pick. The ice blockage remained intact and the waters continued to rise.

Of course, water pressure did the job and eventually the small tunnel formed.

Global warming is a huge concern in South America just as it is elsewhere. Most experts say that the Moreno Glacier will be completely gone within 25 years. Guido Vittone, a local guide who has taken part in research expeditions onto the great ice cap, told me that this is an Apocalyptic vision and not likely to be correct. The glacier continues to advance to the lake and as long as snow falls on the accumulation area, we should not see significant retreat of the big glacier.

I don’t know. I’m an agnostic when it comes to catastrophic global warming.

I told Guido I’d meet him here in 25 years to check it out. Heck, I’ll only be 91 years old then. Hope I can still strap on crampons and join him for a trek across the ice. We’ll try for Christmas Day 2037. Happy Holidays.