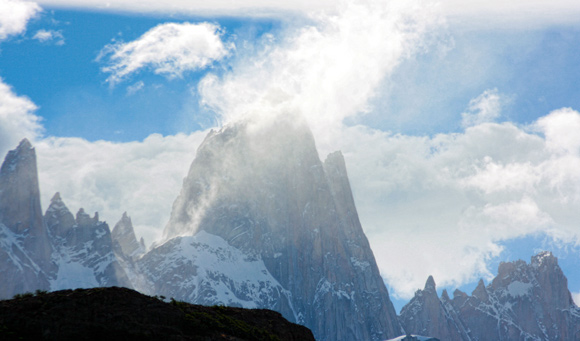 [dropcap]T[/dropcap]he first time I saw a photo of Mt. Fitz Roy, I knew I’d be here someday, if only to see close-up this historic and beautifully rugged place. How many would undertake an extreme journey because of a photograph? Perhaps some are drawn to the Eiffel Tower or the canals of Venice because of a picture in a magazine or even a scene in a movie like Casino Royale. For me it’s the sheer granite vertical walls of one of the world’s iconic mountains.

It’s late December, 2012, and I sit at the base of the majestic peak close by the shores of Lago de los Tres. Although I have done some climbing in the Andes, and have photos and the memory of a dislocated right shoulder to remind me, I am not thinking of even setting foot on this mountain or on nearby Cerro Torre. These are ranked as the among the hardest climbs in the world, and I won’t even pretend. No; I’m just content to be here–just to see them up close.

We had hiked a few hours through beech forest along the Rio Electrico starting perhaps seven miles north and east of El Chalten, then along the Rio Blanco. A sharp right turn led us up a steep, rocky, somewhat exposed climb to reach the lake in the shadow of the majestic mountain. There’s only one problem. I can’t see the mountain at all. It is shrouded in a white-out of misty cloud and fog from its 11,290 foot peak all the way to the glacier-blue lake at its base.

“We’ll just wait here a bit,” says our local mountain guide, Guido. “The clouds may lift soon.” I pull a ham and cheese sandwich out of my daypack and watch the weather.

Mt. Fitz Roy was first climbed in 1952 by Lionel Terray and Guido Magnone. Terray, a Frenchman and one of the foremost mountaineers of his day, was already a famous climber in 1952. He had made the 2nd successful ascent of the north wall of the Eiger and had also played a crucial part in the first climb of an 8,000 meter peak—Annapurna in 1950. Although Terray didn’t summit Annapurna, he was instrumental in saving the life of Maurice Herzog who suffered terrible frostbite on the descent. Herzog, of course, went on to write one of the finest books in anyone’s adventure library: Annapurna.

Some online resources state that Fitz Roy was named for the first person to climb it, an unfortunate bit of misinformation. It is actually named for Captain (later Admiral) Robert Fitzroy, commander of the HMS Beagle during Charles Darwin’s famous journey of 1831-1836. Although not the first person to climb the mountain, Fitzroy may have been the first westerner to see it. From his ship, he noted that a great river emptied into the Atlantic at the site of what is now the city of Santa Cruz, Argentina. Determined to find its source, he and Darwin traveled for three difficult weeks up river. They never reached Lago Argentino—the source of the river– but they did get far enough into the interior of Patagonia to see the snow covered peaks that fed the lake. And one of those peaks may have been the big mountain. Satisfied that they at least knew that snow melt fed the river, they turned around and sailed downstream back to the Atlantic.

The explorer and naturalist Francisco Moreno is credited with “discovering” the mountain, and he named it Monte Fitz Roy in honor of the Beagle’s captain in 1877.

The clouds lift a little and I can see more than half of the granite face. I watch for a time. The cloud cover remains. I just happen to have a copy of Lionel Terray’s autobiographywith me and I’ve been reading a little of it every day on this trip. I pull the book out of my day pack, lean back against a rock and start reading. Guido is seated near me and out of the corner of my eye I see him turn toward me. He spots the book and his eyes grow wide as a child’s on Christmas morning. “I’ve heard of that book, but I didn’t know it really existed! Can I see it?” I hand him the book, vowing to myself that I’ll make it a gift to him when I’ve finished.

He leafs through it for a few minutes and hands it back. “Don’t tell me what happens to Lachenal,” he says. I promise that I won’t.

It seems we won’t see the mountain after all. We decide to head down so we can reach El Chalten in time for dinner. But perhaps half an hour later, still miles from the town of El Chalten we turn and the clouds are clearing. We can see the whole of the great granite wall now. I can trace in my imagination the route along the east shore of Laguna de los Tres and then across the ice field and onto the east wall where Terray and Magnone must have begun their climb. We have hours to go before we’ll reach the village. People with us are debating what will come first, a hot shower or a beer at the local microbrewery. But I stand and watch the clouds lift from the peak and snap a couple of photos. I see a layer of snow, laid like a fine cotton blanket casually over the curves of the lower slopes. Up high, snow and ice cling only to tiny ledges. The dark granite glows almost pink in places from the slanting sun. For me it’s a satisfying moment, as good as an art lover might find standing before the Mona Lisa, getting lost in the subtle smile.