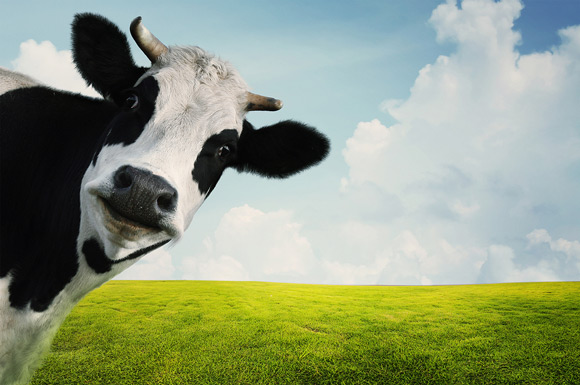 I grew up on whole, raw, unpasteurized, non-homogenized, unaltered milk fresh from our organic pasture-fed herd of Guernsey cows. Now, to be fair, the word “organic” wasn’t thrown around back in those days, but we did not use any herbicides, pesticides, or artificial fertilizer on our pastures, so I think our green meadows qualified.

You could see the cows grazing on fields of clover on misty mornings, the green pasture looking like a painting by John Constable, a little trout stream, with weeping willow trees along its banks, flowing along the northern edge. Early mornings, often before dawn, we’d head out to the barn and milk our 20 cows by hand, the milk splashing with a metallic ring into pails that we then poured into 3 foot high milk cans—the kind you only see in antique stores these days.

The milkman arrived shortly after and lifted the cans into the milk truck to be driven to the commercial dairy for adulteration. I never saw or tasted the result of that process while I was on the farm.

We always kept a tall pitcher of fresh milk for ourselves. At breakfast, the milk that we poured over Corn Flakes was only minutes old, and then the pitcher went into the fridge for the day. At dinner, I always enjoyed a tall glass. The milk had a frothy richness and you could see fresh cream in buttery luxuriance rising to the top of the cold glass.

We all consumed enough butterfat to create a family of WeightWatchers. But none of us was anything close to overweight.

When I was 12, we moved away from the farm and settled in the Chicago area. One of my early recollections was my first taste of milk from the supermarket. “Oh, gosh! This is awful! There’s something really wrong with this milk!” It had a mild but decidedly putrid smell and taste. It looked more like used dishwater than milk. And, I absolutely refused to drink it. In fact I did not touch a glass of milk for another 55 years.

Yes, I poured the stuff that passes for milk onto my cereal— then added a teaspoon of sugar. And I got into the soy milk craze for a few years. But that went by the wayside too. I just would not touch dairy—I did make an occasional exception for Haagen-Dazs ice cream.

When my son, Scott, and his wife had their first baby (see The Cutest Grandbaby in the World) earlier this year, we went back to see them at their home the rural western Massachusetts.

“We buy our milk and cream from a local dairy,” Scott told me. “You ought to ride out there with me.” 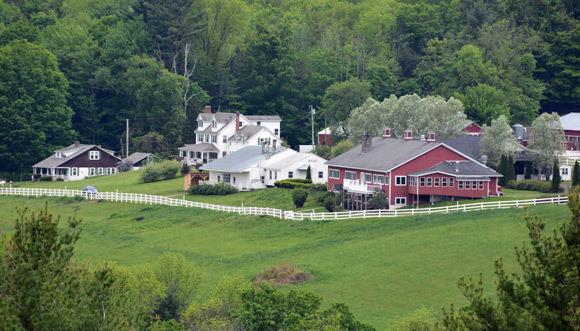 We drove less than a mile on a country road to clean, fresh painted farm buildings surrounded by clover and alfalfa fields. I followed Scott into a small red building and inside found coolers with glass bottles of fresh whole raw cream, and larger cartons of raw milk. Other coolers contained fresh homemade ice cream and yogurt and cheese.

Nobody was minding what could loosely be called a store. “It’s an honor system,” Scott said. “The prices are posted on the wall. You just pick out what you want, add up the price and leave the cash on the table.” Scott and I both picked up several bottles of raw whole milk, cream, and ice cream—the milk only hours old—and left the cash.

The dairy industry states emphatically that exposing milk to high temperatures to kill bacteria and destroy most of the enzymes in natural milk does not alter the smell or taste of the stuff. Really? One taste of the raw milk that day brought it all back—the clover-sweet taste of milk as it is supposed to be; the thick richness of milk with the cream still in it. My wife, Andrea, born and raised in Santa Monica, had never tasted raw milk before. I don’t know whether she had any trepidation about drinking this potentially contaminated stuff, but with one taste she was a convert. “Wow! That’s the best milk I’ve ever had.”

And fresh cream in our morning coffee? Nothing like it. We must have gone through two bottles of cream and two or more cartons of fresh milk during our week in New England. Oh, and freshly made ice cream too. I was sold on taste alone. We enjoyed a week of butterfat heaven. And neither of us gained a pound.

Of course, when we got back to California, we had to find a source for raw milk. And we did find one farmer’s market that sells fresh whole milk, cream, and ice cream. So, now I’m a milk drinker again.

What about the dangers? Here is a link to the FDA’s position on raw milk. Is it over-stated, close to hysteria? In my opinion, it certainly is. But here’s the official position of your government:
http://www.fda.gov/Food/ResourcesForYou/consumers/ucm079516.htm#video

So, if you drink raw milk and become ill, don’t say you weren’t warned.

Then again, the big commercial dairies and factory farms send lobbyists to Washington and they lavish something on the order of $8M per year on our representatives to ensure that their side has the legislative advantage.

Experts are split on the health benefits vs. hazards of raw milk. There are university studies showing that pasteurization may cause lactose intolerance, and other reputable studies that prove that is not the case.

The few farms that legally provide raw milk are scrupulously inspected for cleanliness, proper hygiene and prevention of contamination. Farms whose milk is sent to a plant for pasteurization, etc. are not subjected to the same level of inspection—with the logic that all the milk is going to be pasteurized with a high heat process anyway. No bug will survive.

When I recently reviewed the evidence-based material available online, I was left without a firm conclusion. However, the evidence seems to point to pasteurized and homogenized milk as a nearly indigestible product that can hardly be called milk at all. Can drinking raw milk cure lactose intolerance? A Stanford University study says, “No.” A Yale study (and a number of others) seem to say, “Yes.”

An informal survey of 700 people with lactose intolerance found that a clear majority were able consume raw milk without digestive problems.

When I began researching the subject of raw vs. processed milk, I soon found that this informal post could turn into a literature search with a hundred footnotes. I have decided not to do that. But I will tell you my own conclusion: I think raw milk is far healthier than pasteurized and that the information from the government could be the result of lobbying efforts more than from scientifically based research.

Is pasteurization actually unhealthy? There is ample evidence that drinking processed (pasteurized and homogenized) milk increases the risk for ear infections, allergies, and asthma, as well as major digestive problems. The commercial dairies claim that pasteurization does not kill all bacteria, only the pathogens. And yet, if you research the techniques of rapid heat pasteurization as well as the more recent technology of microwave pasteurization, you’ll find that over 99.99% of all bacteria are destroyed, including some very healthy organisms necessary for digestion.

Of course, one has to also consider the farm and its environment. Is raw milk from healthier cows? Quite possibly. They usually graze on fresh grass in green pastures. The cows in the factory farms may be fed processed soy-based meals and ground grains as well hormones, steroids and antibiotics. Are there healthy environments for cows on big commercial farms? Yes. When that is the case, it’s usually indicated on the milk carton.

There is ample evidence that raw milk is a healthier choice. But there are also documented cases of illness caused by drinking raw milk. But the statistical risk has been estimated at about one in six million.

My opinion? The filthy farm conditions that existed in the late 1800s up to the 1920s when pasteurization became widespread have been replaced with high levels of safety and hygienic conditions today. Properly handled and bottled, raw, whole milk should be considered by anyone who desires a real, whole-food alternative to the thin, watery nutritionally stripped-down product you’re getting from the grocery store. It is likely a better food, one that is digested easily and full of vitamins, calcium, and healthy digestive enzymes. Some authorities opine that pasteurization should be considered an outmoded procedure.

Andrea and I buy raw, whole milk from a local farmer’s market. Unless nothing else is available, it’s the only milk I consume. Yes, I’ve done the research, and I have made the change to raw milk at least in part for health benefits. I do make sure the milk is from a clean and government inspected source (by the way, if raw milk is not legal in your state, I’d advise against buying it–don’t risk raw milk from a farm that does not meet health department standards or is illegal contraband!). But my deeper, perhaps emotional, motivation for buying raw milk and cream? It’s all about the taste. I hated commercially processed milk from the supermarket when I first tried it at age 12 and honestly, I still can’t stand the stuff.