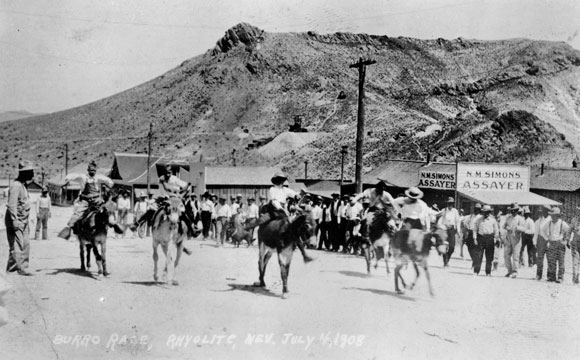 Hyperbole: Extravagant exaggeration; language that describes something as better (or worse) than it actually is. (Merriam Webster)

In August, 1904, two men were crouched on the desert ground in semi-darkness before dawn. They held their hands over a small campfire to warm themselves. The morning breeze smelled of the heat that would come later, when the sun was up, but it had been close to freezing overnight and wasn’t much warmer now. They were prospectors and they were camped just over the hills from Death Valley.

They were about to make an historic gold strike. Some even say that their find saved the state of Nevada. You wouldn’t guess any of that if you looked around the town that sprang up as a result of their bonanza. It lies in ruins now, a bit over a hundred miles north of Las Vegas. Perhaps some of you have been there, but not many know its story. The town was called Rhyolite.

An old legend says that while one of the men, Ed Cross, was frying bacon and heating baked beans over the fire, one of their mules ran off; Ed’s partner, Shorty Harris, scrambled up into the hills above their camp to catch it. When he’d nearly caught up with the mule, the story goes, Shorty tripped over a rock and sprawled out face down in sand that was speckled with gold. History books claim that he shouted then, “Forget breakfast, Ed. This is it! The find of the century!”

In truth, no mule ran off, and Shorty didn’t trip and fall into the greatest gold find since the Comstock Lode. But maybe I should let it be and call it close enough.

Shorty Harris did find an outcropping of rock close to where their five mules were grazing. The rock was rich with copper and also appeared to have a vein of gold running right through it. He chipped off a fist sized chunk of rock with his pick, carried it back to the camp and heated it in a pan over the fire. The pan itself glowed red-hot. While he and Ed watched, pure molten gold ran clean and gleaming right out of the stone.

The surface of the rocks, because they were rich with green streaks of copper, had the look of a bullfrog’s back. So the men named their claim the Bullfrog Mine.

They staked out a claim, built rock monuments to mark the boundaries, and headed for the nearest assayer’s office, ninety miles away. Even before they took rocks to be sampled by the assayer, they showed them off to some of the men around the town; veins of solid gold ran through those rocks. The village, in Shorty’s words, “… turned into a frenzy, looking like an anthill someone had thrown sugar on.” Dozens of men, maybe hundreds, in a swirl of wagons and buckboards and even wheelbarrows that they’d push 90 miles by hand, headed out of town toward the Bullfrog Mine.

The assayer called the samples they’d brought in the richest he’d ever seen. And the word spread very quickly that the Bullfrog Mine was the biggest find in close to fifty years.

When Ed and Shorty returned to their claim, they found 1,000 men camped nearby. Word had spread fast of vast riches in the Bullfrog Hills.

In less than a year there were 150 new claims in the Bullfrog area. Some miners, looking for quick riches, set out to sell shares of stock in their mines rather than actually getting gold out of the ground and many issued stock certificates without ever putting pick or shovel to their stake. Because the Bullfrog Mine had become a nationwide sensation, producing millions of dollars in gold, most of these men gave their mines names similar to Shorty and Ed’s original. Mining claims like the Bullfrog Winner Mine, the United Bullfrog Mine, the Bullfrog Gold Note and others dotted the hills.

Where once there had been only miners’ tents, a real town arose out of the desert. Power lines were brought in, the railroad laid new tracks and a train depot was built. The town was called Rhyolite. The Los Angeles Herald called it “the biggest mining camp in the world with a population expected to reach 20,000 soon.”

Rhyolite never got quite that big, but that didn’t mean it wasn’t booming. For a time, it was the third largest city in Nevada. The railroad delivered 50 boxcars full of supplies and a few hundred people to the burgeoning town every day. A two story school house was built, and a busy stock exchange office, as well as a grand 3 story bank building to hold all the money streaming in. Twenty-three saloons bustled with thirsty miners and speculators; a red light district appeared on the west side of town.

The payroll of the Bullfrog Mine and adjacent mill for processing ore topped $100,000 a month. Charles Schwab, the Bethlehem Steel magnate, having heard excited claims of wealth came to town and after a bit of investigation and negotiation, bought the Bullfrog Mine and mill. Legend has it that Shorty Harris lost his share in a poker game. Truth is he went on a six day drunk and when he sobered up found that he had sold his share for $25,000—all legal with notarized paperwork and his own signature. Ed Harris on the other hand received $125,000 for his share and he retired to a nice ranch in Escondido, California where he spent the rest of his life.

A man named Tom Kelley built a house with 30,000 empty beer and wine bottles, a certain testament to the success of the saloons in town. That house is still standing today, although it has needed a bit of new adobe from time to time to keep all the bottles in place. Except for the train depot, it looks like the only thing in the old town still standing.

Despite the excitement, the gold fever that had infected prospectors and investors from San Francisco to New York City, consisted of a lot more fever than gold.

Of the seven mines that were founded and explored on the very edges of the original Bullfrog Mine, only one panned out at all. The other six were sunk into worthless ground. And the hundred or more others? Mostly worthless, unproductive pits.

Charles Schwab—no relation to the investment firm Charles Schwab—looked at one more property that rumor said was going to be as rich as the original Bullfrog. The owners of this mine, the Bullfrog Gold Bar Mine, had already sold close to a million shares of stock at a dollar each. But when Schwab’s own engineers looked at the mine and it’s ore samples they reported that all was not well, and that the ore sampled may have been faked, or at least rather cherry picked.

When Charles Schwab elected not to buy, a local newspaper man looked into the matter. When he reported that the hype about Bullfrog Gold Bar was overblown, and between the mine itself and the stamp mill to process ore (where, just by chance, none of the machinery seemed to work) perhaps there wasn’t even much gold to be mined, the bottom began to fall out at Rhyolite.

The Bullfrog mine continued to produce. It employed men to dig the ore and even more to process it at the stamp mill. But many of the other miners gave up and left. Investors money started to dry up as the hype and the hope turned to dust.

Then the earthquake of 1906 struck San Francisco, evaporating investor money even more.

Shares in the Bullfrog Gold Bar Mine dropped to 7 cents a share. A few of the property owners in Rhyolite moved out and abandoned their houses rather than pay the property tax one year. And in another year, many more followed. Rail service stopped and the railroad tore up the tracks. Electric bills went unpaid. The original Bullfrog mine continued to produce, but more than 140 others went broke.

The electric company turned off the juice to Rhyolite and workmen took the power lines down and coiled them up. The last person to leave Rhyolite didn’t have to turn off the lights—they’d already been extinguished for good.

To the casual visitor today, Rhyolite is an interesting ghost town, yet beneath the surface, if you look and listen hard enough, is a story of hype and false promises that is nearly inconceivable. A whole city built, careers begun and lost, investors swindled at great cost. But then, given the much greater sophistication of our modern (or post-modern) age, nothing like that could happen today, right?