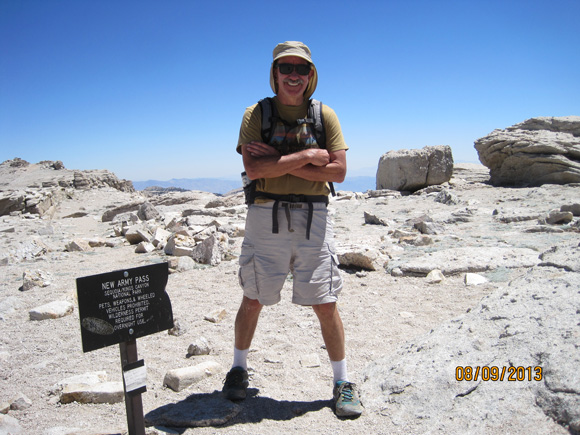 [dropcap]S[/dropcap]he had driven her Ford Ranger pick-up, painted the forest green of the National Park Service, from Lone Pine up the narrow switch-back road to Horseshoe Meadows. Her khaki shorts and shirt clung to her young, thin form and showed off strong runner’s legs. I happened to be in the parking lot, retrieving some gear from our car when she pulled up.

Her name tag read, “Cassandra.” I wondered for a half second whether her parents were fans of Greek mythology or just thought it was a nice name. Did they really want to name her for the prophetess who was not believed?
What really caught my attention was her belt buckle. It was rather outsized, measuring a good 5 or 6 inches across with a silver high wing single engine retractable aircraft against a dark blue background pictured in the metal frame.

“Oh, the belt buckle–yes,” she said. “But the only thing I’ve ever flown is a 150.” She was referring to a popular Cessna trainer. “I’m working to get my commercial rating so I can fly for the Forest Service.”

We talked airplanes and flying for a few minutes and then I mentioned our plans. My wife, Andrea, and I were doing some hiking as a tune up for Mt. Whitney. “But, we’re going to go the long way–from here to Guitar Lake and up the back side of the mountain. We’ll backpack and take 3 days to do it.”

Cassandra nodded. “I’ve done Mt. Whitney quite a few times, both from Whitney Portal and the way you’re going to go. You’re smart to do it the back way. It’s prettier. It’s much less crowded. The east approach can be like the 405 Freeway at times. The high camp is literally smelly, like a big latrine.”

She asked whether we had permits for Whitney and I told her we had procured them months before.

“I may be patrolling the trails when you go. Maybe I’ll see you up there.”

She collected our fee for the campground, got into her truck and headed back down toward town.

Andrea and I were camped near the trailhead for Cottonwood Lakes at about 10,000 feet. We planned to hike to New Army pass, a distance of about 17 miles round trip with a couple thousand feet of climbing just to test our hiking legs and to break in Andrea’s new boots.

The campground was crowded—it’s a very popular overnight spot for people planning to climb Mt. Whitney or Mt. Langley—another one of California’s fourteeners. There was only one picnic table and fire ring for 3 campsites, so it wasn’t surprising that a young man camped near us came over to set up his camp stove at our table.

He introduced himself as Mike and told us he was an ultrarunner getting ready to compete in the Leadville 100 in just a few days. Andrea and I are both self-confessed endurance junkies so we were both enthralled by this guy who could run a hundred miles in less than 24 hours—in fact we were at least a little amazed that he would even want to.

When Andrea told Mike that she had swum both the Catalina Channel and the English Channel, he was equally amazed. He wanted to know all about the training involved for that kind of swim.

So, that evening by firelight, we compared notes on training, nutrition, long distance running vs. swimming. He described his periodization program of weeks that might include running 85 miles or more and then a few easier, shorter, weeks. He told us stories of his ultra runs, including the extremely tough Hard Rock ultramarathon.

He wanted to know how one prepares for the English Channel. “Well, we figured she would do the swim in early September,” I told him. “So she started doing a long swim once a week in January. I kayaked alongside her with a stopwatch and GPS, keeping track of time and distance. We set a goal of her doing 18 miles in 8 hours or less by mid-August. When she able to do that, I was sure she was ready for England.”

Mike told us that the next morning he was going to do a training run to the top of New Army Pass and back.

We left the campground early the next morning, hiked through the forest of foxtail pine to the Cottonwood Lakes and then Long Lake where we sat on the grassy banks of the lake and had lunch. Mike caught and passed us along the way, running as light and easy as a deer.

The real climb started just after High Lake and took us to the pass. From there, Mt. Langley stood just in front of us, invitingly close. But we had agreed to a turn-around time of 1:00 PM and it was already a little after noon, so we headed down.

And besides, putting in a 17 mile day seemed enough.

When we got back to camp, Mike was there and waiting. He wore clean running shorts and a souvenir T-shirt from the Angeles Crest 100 mile run. “When I got to the top of the pass, Mt. Langley was right there!”

I sat down at the picnic table and took off my shoes. “I know. It looks awfully inviting doesn’t it?”

Mike sipped an energy drink. “It looked so inviting that I just ran there too. It was only about 3 ½ more miles to the top. I just had to go.”

So in less time than we took to hike to New Army Pass and back, he had run there and then climbed a 14,000 foot peak and returned.

Still, I figure we did a hike that was longer and harder than anything we’ll do in any one day on Mt. Whitney. The Labor Day weekend is about 3 weeks away. I guess we’ll find out.

Just before dark, a small single engine airplane flew over us from the east and I wondered if Miss Forest Ranger was out for a training flight. It was August 11th and the Perseid meteor shower was due to begin. I set up my Canon camera on a tripod, aimed it at the southern sky, and set it for several minutes of timed exposure.

Andrea and I were both in our sleeping bags shortly after dark. I thought I might sit up and watch for the streaking lights of falling stars, but I only saw two of them from the open door of the tent before I fell fast asleep. Mt. Whitney the long way is beckoning.