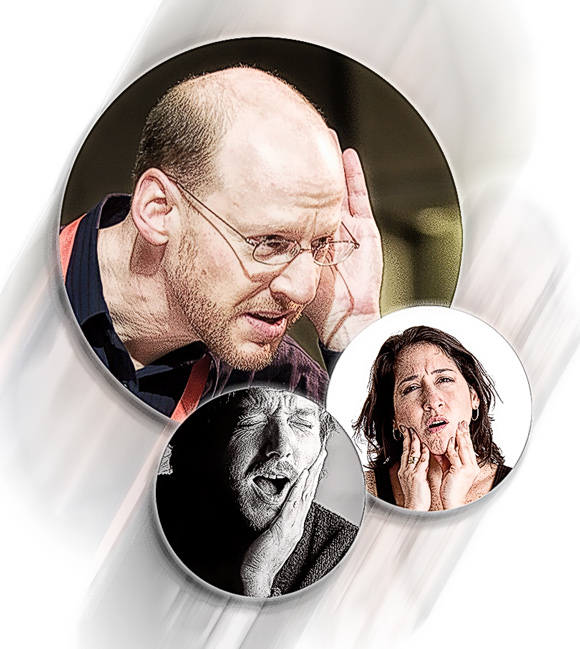 When a new patient comes to my office, I first meet that person in a consultation room to review his or her medical and dental history and concerns. My wife, Andrea, is usually present for that meeting as well. Think that might be a plus? You bet. Another set of ears, especially when two of those ears are connected to a feminine, intuitive brain is certainly helpful. And just like Peter Falk in Columbo, when the intake interview is over and we’re about to start the exam, Andrea is very likely to say, “Oh, I have just one more question…”

We take our time with this step. There’s no time limit. None at all. This post is about listening, but frankly, I’m watching the patient too. I often know there’s a canted frontal occlusal plane, deflection on opening, limited opening, lateral or anterior tongue thrust before I even start the exam. I also observe seated posture. But most of this early time is spent listening. I want to hear the whole story, and sometimes it’s a long one.

So I just want to ask: Are you listening?

Helen B. was one of those patients last week. She was referred because of masseter muscle pain. “I told my dentist that these two crowns he did—she points to the upper left bicuspids– are hitting too hard. He says they’re perfect. He says, ‘Look, I have a dental degree and you don’t.’ He sent me to an endodontist to see if I needed root canals. The endodontist says I don’t need root canals. He says maybe it’s a TMJ problem and sent me here. I just think those two crowns are too high.”

When I checked occlusion with T-scan it was clear that #12 and #13 hit first and hit hard. That certainly appeared to be the reason for her symptoms. But I wanted to see what those crowns looked like with that old standby articulation paper. Using Bausch brand articulating paper, it was difficult to see much difference between those two crowns and the other teeth on the left side. A follow up with AccuFilm brand however clearly showed the two suspect crowns in heavy occlusion and nothing else making a mark. I also tried shim stock (Occlusion Registration Strips by Artus) and while the bicuspids made solid contact on those thin strips, I could pull it out from between the 1st molars with little resistance when the patient closed firmly.

Bottom line? The patient was correct. I did my best to be diplomatic. “Well, in your dentist’s defense, this is hard to see with regular marking paper, but you are correct. Those two crowns are high. What I can do is mail your dentist T-scan print-outs and I’ll get him on the phone and talk with him. I’ll give him some guidelines for making the adjustments.”

“Okay,” Helen said. But I could hear some reluctance in her tone.

Two days later, Helen called me at the office. “I’ve thought it over, and I’m not going back to that dentist. He doesn’t listen to me anyway.”

Of course, you might be thinking, it would help if the patient used language I could understand. But it won’t always be that way. Your patient doesn’t speak Dentaleze. Janice R. is an example. She told her dentist, and also told me, “My teeth don’t fit in my mouth.” Now, she goes to an excellent dentist who’s been around the block a few times. But her words just didn’t compute. He told her she didn’t know what she was talking about.

Now, if she would have said, “I woke up about a week ago with pain in my right lateral capsule and my mandibular midline shifted 2 mm to the right of where it was the night before and the cusp-fossa relationship of the posterior teeth was out of normal position,” that may have made some sense. But nobody but a dentist would talk like that. Actually most dentists wouldn’t either.

Omer Reed told me years ago that if he was having difficulty sorting out what a patient was trying to tell him, he would say, “I’m not sure I understand, Mrs. Jones. Can you try telling me a different way?” And he would make every effort to help the patient clarify.

In Janice’s case, she had completely displaced the articular disc in the right TMJ. And that in turn caused the mandible to shift position and her upper and lower teeth no longer met the same way. Yes, her teeth didn’t fit in her mouth—or at least that’s how it felt to her.

If your patient says something that doesn’t seem to make sense, don’t brush it off too fast. “Hmm. I’m not sure I understand. Can you try telling me a different way?”

Another recent patient had implant supported full dentures placed three years ago and had suffered jaw pain and ear pain ever since. “I feel like I close too far and my chin is too far back. That’s what I’ve been telling my dentist. But he says everything is perfect. I’ve been to all kinds of doctors. My ENT thinks it’s TMJ and he sent me here.”

One look at her profile and the accordion-like folds in her upper and lower lips and I think she’s right. I think she’s over-closed. Joint imaging shows both mandibular condyles well posterior to centric relation. So the lady is correct. I explain that I’ll do an acrylic appliance that will fit over her existing denture and we’ll work with it to provide better comfort and then she’ll need to have one of the dentures re-done.

“Well, that’s fine,” the lady says. “But I’m never going back to that dentist. I told him three years ago I thought I closed too far and he wouldn’t listen.”

So what’s the problem? I think there are several. First of all, well, we just don’t listen. We’re much too time-crunched (Do we thank ever decreasing insurance reimbursement for some of that? Or inflation?). One patient told me that on a visit to her MD type doctor when she asked a question he said, “Look! I’ve got 17 minutes to do your physical. I can’t chat with you.” Okay. I know we can do better than that.

Second, we’re simply not very good at it. Just ask your spouse. I’ve attended several continuing education courses on this topic and I still don’t claim to be an A student. But I work at it. There’s a lot of information in a patient’s story including voice tone, facial expression, body language.

“You’re not going to go through this life and be perfect, so get over that idea.” ~ Omer Reed

I suspect you won’t hear a patient say to you, “You’re not listening to me!” But they come to me and say, “My dentist doesn’t listen to me! And by the way neither does my primary care doctor.”

In my practice I hear it every day: a general complaint about physicians and dentists not listening, not hearing. So, this is a call to reverse the trend. I didn’t say this would be easy, but to quote old Charley Mayo, who founded the Mayo clinic and made the cover of Time Magazine many years ago, “Listen! Listen! Listen to your patients. They’re telling you the diagnosis!”