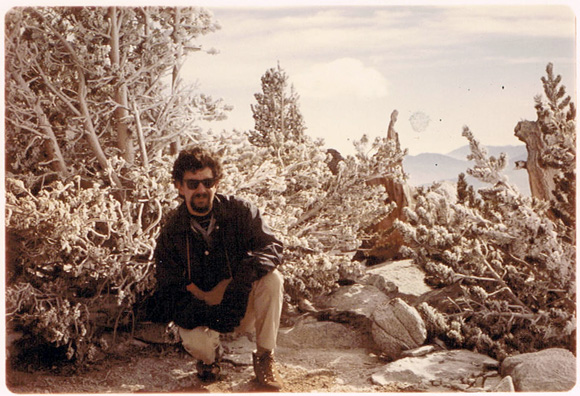 Sixty may be the new forty; but I’m not too sure about sixty-five.

Living warm in summer
Suddenly: The streets are filled
With Fallen leaves

[dropcap]M[/dropcap]t. San Jacinto, Southern California’s second highest peak, made me feel it: The undeniable approach of something beyond middle age. I first walked one of the several approaches to the summit when I was 17. Over the years I must have done the Devil’s Slide trail out of Idyllwild a few dozen times. A walk to the top is eight miles with 5,000 feet of climbing. My wife and I have done it a couple of times a year for the past 4 or 5 years. Sixteen miles round trip, a good day hike. Touch the summit, sit out front of the old stone cabin just shy of the top, take about an hour for lunch and then head back down. A moderate but very do-able 8 hour day. I always felt about the same, walking strong and quickly, heck I might have still been 17.

And then we did the hike early this fall. I felt miserable by the end with sore feet and aching legs; I was plain worn out. Andrea had to slow down or even stop a few times to wait for me. It took me 9½ hours to do the hike. I felt that I’d aged several years over a span of a few months. And I wasn’t too happy about it either.

It was our financial planner who planted the idea that 60 is the new 40. Some time after the debacle of 2008 she looked over our retirement account and said, “Look, you’ll just have to plan on being in practice about a decade longer than you expected. But that’s okay. Sixty is the new forty anyway.”

Okay. That’s cool, I thought. I really do feel no older than forty. But that was then.

A couple of very old photos might give you some perspective. At the beginning of this blog, that’s me with the beard and the really awful looking long hair. And the bota bag? I must have just finished The Sun Also Rises and thought drinking from that hard stream of red wine splashing into my mouth and then cutting it off quickly without a spilling a single drop would be cool. Below, standing beside me on that mountain summit is Bill Leukhardt. Friends rarely called him that though. He was either Luke or Cool Hand. We’re a few years out of high school in the photo and he’s fresh back from a tour in Viet Nam. US Marines. Reaching that peak seemed to always feel about the same whether I was 21 or 60. But not 65. This year it felt entirely different.

Cool Hand Luke and I were both athletes in high school. He was a pretty good miler and I was a fair 2 miler. We both earned varsity letters in track. Being varsity lettermen meant a good deal to both of us, but I think it meant even more to him. Forty-seven years later he still has the copy of the Helix High School newspaper—The Fling—that carried a short article about us lettering in track.

Neither of us ran very seriously after graduation, but we were in seriously good shape. We used that fitness to great advantage for many years as we took epic hikes and backpack trips all over the west.

My wife, Andrea, was also an athlete when she was young. In fact she was quite a bit more accomplished than I. When I was a student at Southern Cal, she was a 14 year old girl working out with the USC men’s swim team. She qualified for the Olympic trials in 1972 but didn’t make the team that went to Munich. Years later, she was still an outstanding swimmer and even in her 40s swam the twenty-plus miles from Catalina to the Mainland and has also done the English Channel.

We were both strong athletes once and I really thought we would feel that way forever.

Do not go gentle into that good night.
Rage, rage against the dying of the light.

Okay, so Dylan Thomas wrote that for his dying father. And I’m not dying just yet. But I figure, if I’m going to rage against the dying of the light, I might as well start early. The experience of feeling old and weak coming down the trail from San Jacinto got me thinking, researching and reading. I’m not too sure about aging gracefully, because to me that phrase means to accept the frailty as it comes and smile sweetly and look happy enough. Well maybe 20 years from now, but I’m stubbornly resisting those changes now.

At the same time, I remind myself that my dad suffered a heart attack and passed away when he was a few years younger than I am now. So, I try to not become too overly confident. Time’s winged chariot is drawing near and all that. Still, I figure I want to go a lot of places and do a lot of adventurous travel over the next ten years, so how do I go about accomplishing that?

So here’s the truth of it for me and maybe for many of you: I thought the strength and speed and endurance would just be there! Not much effort needed beyond a fairly active life style. Well, I guess it just isn’t so.

To sum up the research I’ve done in a very brief form, the experts agree: keep moving and eat a healthy diet. For many of the experts, eating healthy means going vegan. I’m not sure I want to go to that extreme though. Jimmy Buffet tried it once and it just ended up being a song—Cheeseburger in Paradise! But I am striving for a very healthy diet. I’m also a fan of dietary suppliments offered by Dr. Al Sears (look him up!).

In terms of fitness routiness, Andrea has always been more disciplined than I am. She’s been faithful to a stretching regimen almost every night and I have not. She has been doing strength building exercises regularly for more than a year. So now I’ve joined her. I’ll just have to be disciplined enough to keep it up.
Five mornings a week we’re both up around 5:30 AM. Three days a week I do strength work with weights, kettlebell, plus parallel bar dips, pull ups and the like. And another three days a week I do a short run. My old track coach used to say, “The workout you do today won’t make you stronger tomorrow. It’ll make you stronger in about 6 weeks—if you continue to work out regularly.” There’s been a lot of research in the area of exercise physiology since he made that statement, but I think he was close to the truth.

If you take a look at our bookshelf you’ll see a lot of fitness oriented books such as Weight Training for Cyclists, Run Fast, The Heart Rate Training Book, as well as a few others. Here though is a short list of books that made an impact on my own raging against the dying of the light:

Pick one of these books or any other that gets your motivational juices flowing and start something. The leaves on the oak really do turn to rust and fall rather quickly.