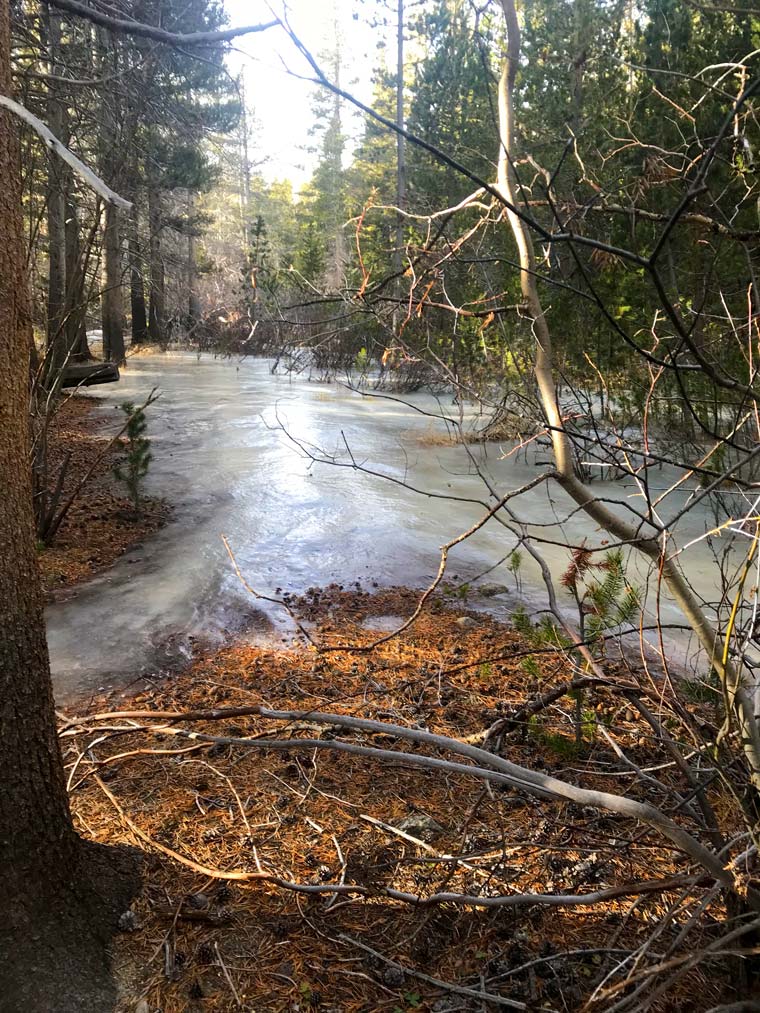 “I used to resent obstacles along the path thinking, ‘If only this hadn’t happened life would be so good.’ Then I suddenly realized, life IS obstacles. There is no underlying path. Our role here is to get better at navigating those obstacles.” ~ Janna Levin

I knew at least two years ago that my niche dental practice—I focus on TMJ related problems and sleep disordered breathing only—was becoming too big, too busy, for me to handle by myself.

At the same time, our financial adviser pointed out that increased income might not be a game worth playing since a good percentage of any additional gain would go to taxes. “You’ve reached your Atlas Shrugged moment,” she said.

Although it might seem that I was faced with a number of choices, such as deliberately slowing the growth or even simply quitting, I never considered any option beyond allowing for continued growth of the practice.

Three words in that sentence are quite deliberate: Those words are Allow and The Practice.

And the Practice but not necessarily my own income. I know, that seems counter-intuitive, but let me explain. In meeting with a transition consultant it became clear that continued practice growth would require additional practitioners unless I wanted to be there a lot more hours. But paying those people well might mean that I would take a reduction in my own income, at least for awhile.

And perhaps that pay cut would be substantial. Was I willing to do that if it meant that the practice itself would be better and stronger for the long term?

The answer was Yes.

And so with the help of that consultant the vision began to take shape and the path seemed to be clear before us.

“If you must play, decide on three things at the start: the rules of the game, the stakes, and the quitting time.” Chinese proverb.

Let’s define the game: It is transitioning from a Mom and Pop small but thriving practice into something bigger, yet retaining the same very personalized and thoughtful interaction and caring with each person who comes into the practice.

Did I start the game not knowing the rules, the stakes, or the quitting time? Correct. That’s exactly what I did.

I started the game, if you’ll allow me to use that term, a little over a year ago. Did I know the rules? Even with the help of the consultant I did not—hell, I’m still learning them.

Did I know the stakes? Yes, I believe I did. What I didn’t know were the odds. Maybe I still don’t. I should recruit some of the odds-makers in Las Vegas, who must be some of the smartest people on the planet, to help with that.

Stakes? If the practice couldn’t continue to grow even with the help of additional practitioners who could add days and hours to my already demanding schedule, the whole thing could collapse. Or at best return to modest Mom and Pop status until I simply walked away. High stakes indeed.

And quitting time? I have a date in mind, and though I won’t make it public here, my consultant reminds me that with enough help I could own this practice until I’m 80 or beyond—I’m 71 now.

As smart as I think that Chinese proverb is, I also think it’s totally unrealistic. It’s a Ready, Fire, Aim world according to Peter Drucker, and so be it.

In these pages, I want to share the trials and tribulations of moving a business or practice to a new and higher plateau, not for the entertainment value but for any lessons that you might find valuable.

I’ll be as honest as I can about what works and what doesn’t, even at the risk of hurt feelings or making myself look like an idiot occasionally.

When the practice added one more practitioner about a year ago, I thought the path before me looked clear, simple and easy to tread. This part of the transition required months longer to implement than I thought necessary. I learned a lot of lessons along the way, but the primary one is that the path will change its character in unexpected ways.

Also, I think you’ll learn things about yourself that take you by surprise.

When a junior associate joined the practice, I never would have thought of myself as a control freak. And yet I found that I’m exactly that—for the good and the bad of taking control.

I also thought that teaching what I knew about this kind of practice would take, oh, a week or two. I was completely wrong. This isn’t meant to disparage the new doctor in the least—she is very knowledgeable and caring—but my own ability as a teacher, coach or consultant.

I am still in the process of recruiting yet another person and perhaps next time I can be more effective.

There are many consultants in dentistry who believe that having associates in a practice is a bad idea and that it never works. The truth is that it seldom works. But never is a big word and I keep believing we can find a way.

Some of the difficulties that have arisen so far are probably common and I’ll discuss them briefly now and then in more depth as the solutions are found—or not.

First, our front desk person, certainly a key person in the practice, liked the old Mom and Pop model just fine and would just as soon go back to it. Not that she sabotages the change, but I do find her guilty of dragging her feet significantly in helping foster the new vision. Dr. Laissez-faire (me) has to be much more managerial than I’d like in this regard. This may require some unpleasant confrontational interchanges.

Transferring trust to the new doctor, while occurring, is coming slowly and that should have been foreseen, but is also partly my own fault.

On a recent Monday, I took the day off and let my associate run the show at the office. I was on the phone with a colleague and casually mentioned that I was home, taking a day for myself.

“Honestly, I feel like a dad who’s just given the car keys to his daughter and let her take that family car out on her own.” Then I paused a second and said, “Actually, I don’t own an airplane, but I could imagine how it would feel to own a nice light twin—a twin engine airplane—and giving my daughter the keys to that. Kinda scary, you know?”

“I bet your associate would not like to be compared to a young girl taking out the family car. Little control freak aspect, maybe? Got to let go of that one eventually.”

Sure. I had to agree.

Yesterday I was walking an established hiking trail in the eastern Sierra with Andrea when we came across this:

Yes that’s actually the trail. There had been a decent winter snow storm a few weeks before, and then, right around Christmas, a warm spell had melted tons of snow and the resulting melt had flooded hundreds of yards of trail. And then last week it got very cold again and the once easy path turned into one big slanted skating rink.

We stopped and just stared at it.

“Reminds me of the practice,” I said.

“Exactly!” Andrea said. We’d just been discussing the difficulties of the practice transition when we came to the ice. “It’s a perfect analogy. Now we’ve got to decide what to do.”

I’m telling you, dear reader, your path, so carefully laid out, so carefully planned, is also going to turn to ice at times. You can stop and turn around—I think a lot of people do just that. You can find your way around, or you can say ‘screw it!’ and just head out on the ice.

Andrea and I did both. She took to the woods. I couldn’t see her but I could hear the snapping of twigs and tree branches and occasional mumbled curses as she found a way forward but off the path.

Me? I strapped some grippers to my boots and headed straight out onto the ice: 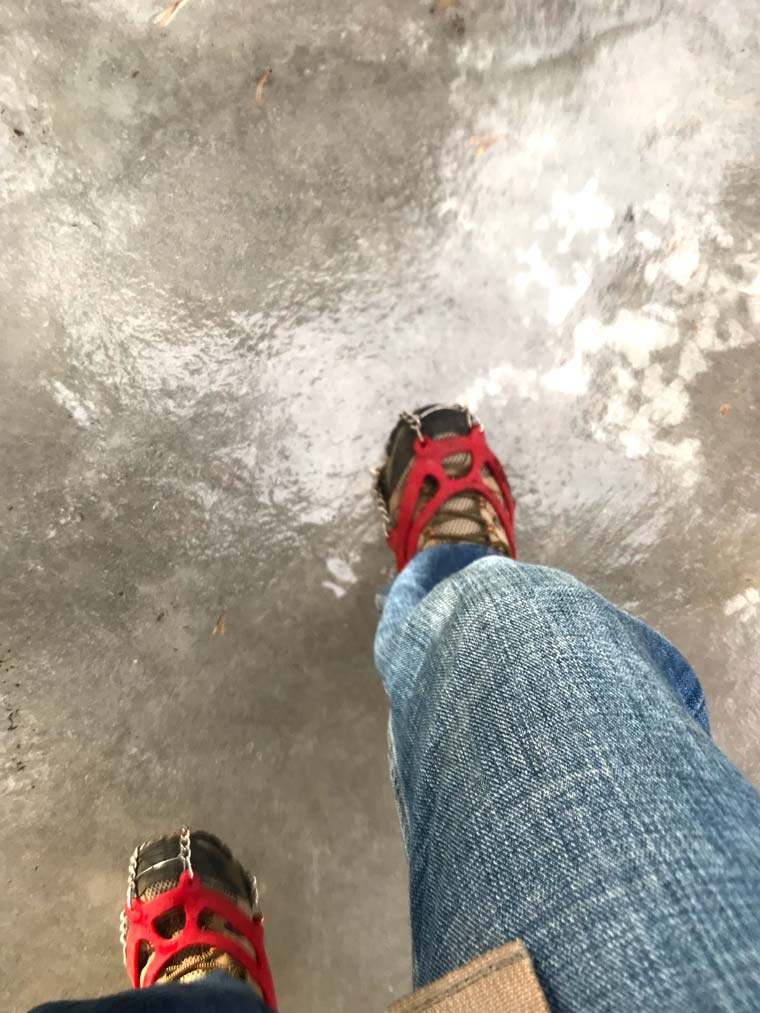 Both approaches worked to make our way upward and onward on the mountain without falling on our asses. But how will it work back in the practice?

William F. Halligan is a 1972 graduate of the University of Southern California’s School of Dentistry. He practiced general dentistry during most of his career with an emphasis on restorative dentistry. He is a member of the American Academy of Craniofacial Pain and a founding member of the Academy of Clinical Sleep Disorders Dentistry. Dr. Halligan’s practice is located in San Diego and is focused on treating TMJ disorders.

Doctors, it’s here! Dr. Halligan’s new eBook will show you how to produce night guards that require far less adjustment and are much more comfortable for your patients. CLICK HERE TO LEARN MORE.

I wanted to take a moment and share what working with you has brought to my life since helping me with my TMJ problems.

I was really frustrated when I came to you because I had dealt with chronic neck and shoulder pain for years, but this was becoming unbearable. The right side of my face was numb, my jaw throbbed, my eyes and sinus hurt like no one's business.

So, there I was in your office, at your mercy of assistance as I had no idea what to do. Three weeks later I left with a small mouth appliance that felt like someone put my head on straight and from there life just got better.

This entire process has brought me to a point in healing I have never been before. You are a true seeker of knowledge and I am beyond grateful for your work, your patience and your unwavering subtle confidence that I felt through your years of experience. I felt safe with you as I sure many others who have sat in your chair before me have. I wish you all best in what this next chapter brings to your life. Thank you for changing mine.