[dropcap]I[/dropcap]have written about this little stretch of river before, (see Sand, Stars and The E-Myth) but the Colorado River is a treasury of memory. Standing at the upper boat dock just last week brought some of them streaming back to me. My dad introduced me to this place decades ago. His smiling face, big hands, constant humor, and ultimate skill with a rod and reel fill a lot of those memories.

Dad was a man of big dreams abandoned or unrealized and I suppose that makes him pretty much like the rest of us. In his younger days he was a standout high school baseball player and even played some minor league ball in the old Illinois-Indiana-Iowa league.

Even though the phrase comfortable in his own skin fit Dad more than anyone else I’ve ever known, he could also have been the inspiration for Bruce Springsteen’s Glory Days. He never forgot his glory days. Even in his 50s, he kept his high school yearbooks around and he’d occasionally read aloud from them—especially the paragraphs that glowingly described this kid who might have been the best schoolboy baseball player in the state.

The New York Yankees had a strong interest in him. He probably thought he was the next Ty Cobb or Ted Williams. He batted an astounding .500 in the minors. But a wild kid driving a stolen ’42 Buick 90 miles an hour on a country blacktop road smashed into the back of Dad’s prized Mercury and ended that dream for him.

After his injuries were mostly healed, he found he couldn’t grip a bat the same way and couldn’t crouch behind home plate with his catcher’s mitt without agony. So, the baseball dream over, Dad took work at a Chicago cabinet shop and after a few years had saved up enough money to start a small shop of his own. He moved us west. He opened his business in Lemon Grove, California making counter tops for kitchens and bathrooms and eventually joined a local flooring company and added carpet and floor tile to his enterprise.

When I was a child, he took me fishing most summers. We went to Northern Minnesota as far up as the Boundary Waters and even into Ontario. When we moved to California, he discovered this spot on the Colorado River on the border between California and Arizona. Long before I joined him to fish here, I heard him talk about it. A glow would come into his green Irish eyes and he’d smile just thinking about the place. There was something mysteriously magical about this bend in the river. I don’t think he ever knew what it was.

The fishing was good of course—largemouth bass thrive amongst the reeds and in the backwaters here– but there was something beyond that. Even now, I can feel it too when I’m here.

One October, years ago, he fished this river for the last time and I was with him. Another San Diego dentist joined us and we camped, fished, drank beer, stared into the night sky and stayed up too late talking for three days and nights. In early fall the weather was fine and warm and the intense heat of summer was fading. 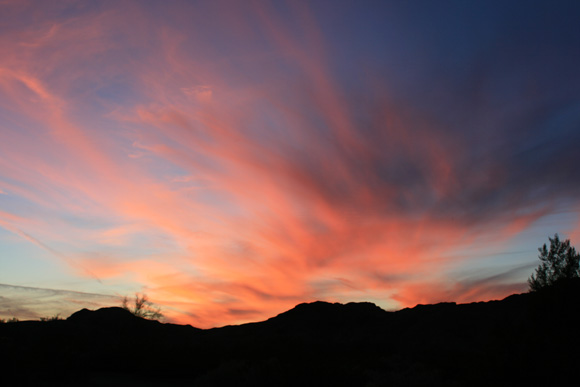 Sunsets exploded with a fire in the sky and the evening star Venus showed bright even before it got dark.

Nights were quiet; the only sound was the occasional bray of wild burros that came down to the river to drink.

I won’t say Dad was a mind-reader; no one is. And yet he seemed to be able to look into a man’s eyes—or a woman’s for that matter—and see what was ticking in the mental clockwork behind them.

It wasn’t easy to keep secrets from him. He always seemed to know when something was up. He even seemed to know what it was. You could tell when he’d zeroed in on something. He seemed to know the emotional meaning of a turn of the hand or the brief flutter of an eyelid, the depth or sparkle or lack of it in a face. He’d lull his quarry with easy talk. How do you feel about the Kyoto Accords? Your practice going well? How about another beer? I think the Pleiades are rising soon. Have a look at the eastern sky.

When his target was relaxed and unsuspecting, he’d launch the barb and it would find its mark and sink in. “I went by your house last week. You know, to check up on the remodel my guys are doing for you. Your wife was there. There was something in her eyes. Something sad and unsettled. And now I look at you and see the same thing.”

Whether it was me, or one of my buddies who just happened to be invited along, we couldn’t let a statement like that lie there like a sleeping cat. “Really? How do things look to you?”

“Well, they don’t look good; I’ll tell you that. So, how is your marriage, anyway?” And the truth would begin to spill out like wine from a toppled bottle.

He’d listen before speaking. And then prompt and listen some more. All the while his eyes and mouth showed a rather amused grin, no matter how serious the trouble.

He’d get a thoughtful look on his face and then begin. “At a time like this, you need to know that you will carry on! That comes first. Good fellowship, the grasp of a friend’s hand, those things help. But my secret, if you want to know the biggest secret of all, is perseverance and attention to detail. In my work, in your work, in your relationship, you’ve got to pay attention. It’s a mantra I say every day. Perseverance and attention to detail. Even if the details have eluded you forever.”

Whether the topic was the joys and sorrows of marriage or the struggles of dental practice, his advice carried the same theme with variations and improvisations.

He would have made a good therapist or coach. There was nothing gentle in his approach. If there was a problem or difficulty, he went for the throat and held on like a terrier. Sometimes I came home from the river feeling better, and sometimes not. But I always came back with a clearer vision of reality.

That October trip didn’t seem different from many others. Dad had put on a few—well, make that quite a few—pounds since his playing days, but he seemed strong and healthy enough. Mom complained that he snored like a freight train, but I never heard the locomotive come through camp so figured she might have been exaggerating. 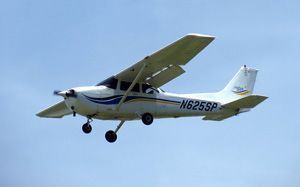 Only four months after that last trip with him, I was flying east sitting in the right seat of a Cessna 172. My brother-in-law, David, was flying left seat. I cradled a cardboard box on my lap—about the size box that a dress shirt from Nordstrom’s would be packed in. He banked the plane north at Yuma and in a few minutes I could see the familiar landmarks, the way the river bent to the left and the narrow fishing hole called Long Lake off to our right.

David pulled the throttle back until the prop barely turned over and the Continental engine whispered. He pulled full flaps and made a slow and low pass over the main channel in front of the upper and lower boat launches.

He swung the plane around and made another low pass over water. I pushed the passenger side door open and held it there with my right foot. The wind made a great roaring sound against the open door. I took the lid off the box and held it into the slipstream and let the wind carry the ashes away. I watched them fall into the river and David and I looked at each other for a moment. He shoved the throttle in, brought up the flaps and headed west toward El Cajon.

My wife and I visit this place by the river two or three times a year. She feels it too—a kind of spiritual energy about the place. I think she may even feel it stronger than I do. Is it the river? Is there something in the ground here? It’s a mystery I don’t understand. But we keep being drawn to this place. I go down to the upper boat launch and look out on the place where I—quite illegally I’m sure—scattered the man’s ashes. But I’m not here to visit a ghost. No, I just love the place and Andrea and I are forming our own new memories here. And they are good ones.