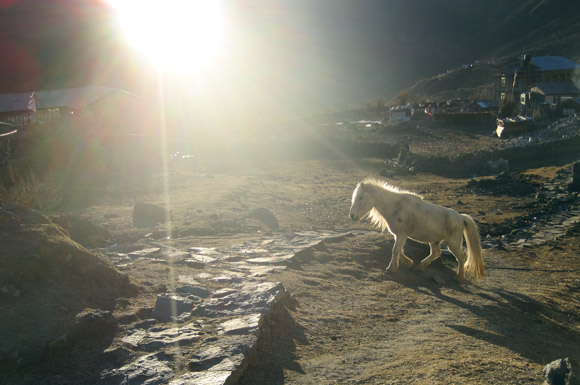 [dropcap]T[/dropcap]he mountain came into view at dawn, a beautiful alpenglow pink against a still dark but clearing sky. Lang Tang, 23,711 feet tall, is not even in the top ten of Himalayan peaks, but its magnificent shape captured me. We were at the first of several tea houses on our way up the Lang Tang Valley to Kyanjin—and all the way the mountain would tower above us.

I suppose I knew what to expect—you can Google anything these days. Our first tea house, the glass windows of the dining room a collage of stickers advertising everything from helicopter service “anywhere in Nepal, including Everest Base Camp,” to various trekking and climbing guides, was about a day’s walk below the small village of Lang Tang and the Lang Tang Monastery. The stickers on the window were in a world of languages from English, German, and French to Japanese.

This first lodging place had its own mini hydro-electric generator and there was power to charge cameras and iPads, but only for a few hours each evening. The toilet facility was an outhouse a dozen yards down a small slope. When you flushed, by pouring water from a big blue plastic bucket, the effluence was carried by a pipe straight into the Lang Tang River. The river runs so clear and clean-looking, a seemingly pristine Himalayan stream. But you don’t want to drink from it.

I’m told that tea houses in Nepal were originally private homes where a traveler could buy tea or coffee and sometimes a hot meal. He might then be invited to throw his sleeping bag on the floor and stay for the night. They’ve become more formal lodges now with real menus printed in Kathmandu and they have private rooms. A hot meal and a room for the night can be had for less than US$10. The rooms though are mostly without electricity and are unheated. The beds are thin cots where you can lay your sleeping bag. One night I got out of my down bag and shined a flashlight on the thermometer that I keep clipped to my daypack. It read 28 degrees.

Andrea swears she would have been warmer in our tent.

Kitchens were smoke filled. Cooking is done over an open fire on a hearth with no chimney and the wood smoke simply accumulates under the ceiling. In some tea houses I’ve heard that the smoke from the cook fire even fills the rooms.

The breakfast menu featured oat porridge and cheese omelets. There was no lunch menu but we all learned to pick up a piece or two of Tibetan flat bread, spread it with peanut butter and tuck it into our packs. Dinner consisted of Sherpa stew: a watery broth with slices of potato, carrots, a bit of cabbage and some pasta. There were other items listed on the dinner menu, but it turned out that they all looked and tasted like Sherpa stew. A rose by any other name…

We had Sherpa stew every night for five consecutive nights. Now, I’m not complaining. Food in this high country is about fuel for the next day’s trek, and that is enough.

We took three days to hike to Kyanjin. Mt. Lang Tang beckoned ever closer. On New Year’s Eve day, a small group of us climbed up to a glaciated bowl that lies between the much lower Mt. Kyanjin and Mt. Lang Tang. You could see where the glacier, originating high on the mountain, made its way down the steep slope to this bowl.

A member of our group asked the guide, Jorlal, “Has anyone ever climbed Lang Tang that way? Right up the glacier with crampons and ice ax?”

“Oh no. Much too dangerous.” Jorlal’s English is a bit limited, but I learned that, in fact, Lang Tang hasn’t been climbed many times by any route. It’s not the highest mountain in the Himal, but it’s difficult. An Eastern European climber tried it solo in 2009. He fell and broke his leg and hurt his back. He was trapped at about 19,000 feet. He had a sat phone and called for help. A rescue team helicoptered in. But, when they got to him, he was already dead.

I’d already looked at the slopes and imagined a climber’s route up the eastern ridge. A sobering thought now.

I’d heard the unlikely story that there was an excellent bakery in the tiny village of Kyanjin and on New Year’s Eve one of our guides bought a whole apple pie and brought it into the dining room. At first Andrea, a trained chef with exquisite taste, said she’d pass. After all, it couldn’t possibly be that good.

But in the end, when the pie was sliced and a piece was put in front of her, she took a tentative bite. “Oh, my goodness! This is really good! Tender flaky crust. Cinnamon and apple baked just so.”

And then the baker himself walked into the dining room. Dark skinned Nepali, a little on the heavy side, friendly smile with a pretty good command of English. He had an interesting story. Years ago, his father had a dream of building his own bakery in this village. After difficulties and at least one false start, he headed up to the Lang Tang Valley from Kathmandu. But unfortunately he died on the trail to Kyanjin.

His son decided he would fulfill his father’s vision. He studied baking and pastry making for two years and then established the Dorje Bakery Café and Coffee Center. He learned to differentiate the taste preferences of American vs. European visitors. And now his pies are famous among Himalayan trekkers. For anyone visiting Kyanjin, a piece of Dorje-baked pie and a cup of freshly brewed coffee is a must.

“But what’s the secret of the crust?” Andrea asked him. “It’s as tasty and delicate as any I’ve ever had anywhere.”

After dinner, in our room, Andrea and I wrote our New Year’s resolutions and thoughts and dreams into little booklets with blue covers and gold embossed mandalas. We knew that our new friend, Maria, from Florida by way of Brazil, was doing the same. The next day we would carry our New Year’s books to the top of Mt. Kyanjin—a mere hill among these high peaks at only 15,600 feet.

It snowed overnight and in the morning the village was a blanket of white. The storm blew through quickly though and the morning sky was the clearest of crystal blue. The top of Kyanjin is a tapestry of Buddhist prayer flags, each flag has lines of prayer printed in black on the colorful cloth and it is thought that when the wind blows, the words of the prayers are carried to heaven. There was certainly plenty of wind on top, so a thousand prayers must have been flying like crows. I placed my little blue book, my New Year’s resolutions—themselves prayer-like—among the rocks on the summit. Even now, when the winter winds blow, perhaps my own words are carried toward heaven. Not as prayers though; but as promises.

Photo Gallery. Click the photos to enlarge, then use arrow keys to navigate:

When Andrea joined me on top she said that I looked as happy there as she’d ever seen me. Perhaps. And yet, I would have described my mood as oddly wistful. As I looked over at the summit of Lang Tang, closer now than I’d yet seen it and most likely closer than I’ll ever see it again, an old memory came streaming back.

About thirty years ago I attended a three-day course on dental practice management and the instructor handed out a questionnaire. I’ve forgotten most of the questions but I remember the very first one: If you knew you could not fail, what is the one thing you would do?

And I wrote, “I’d love to take part in an expedition to Mt. Everest.”

Was I serious? All these years later, I’d have to say that I wasn’t. After all, thirty years ago, I may have been strong enough and fit enough to make a summit bid. If I had been serious I could have taken some mountaineering courses on Mt. Rainier in Washington State or in the Rockies in Colorado. There were courses then (as there are now) given by Everest veterans. Cost could have been an issue, but I know that flat broke hippies found their way to Kathmandu. With a modestly successful dental practice, I could have figured it out. Also it is worth noting that this was years before the recent over-commercializtion of Everest.

So, standing on top of Kyanjin and staring at Lang Tang, I knew that I never seriously went after that dream. And that I would never tackle the even more modest peak in front of me. I realized how drawn I am to the exotic, but at the same time that I’m a stranger amongst peaks as majestic as these. I’ve got no business trying a real climb here. There are other paths I have to follow and the mountains I attempt may be more virtual than real.

Andrea snapped a couple of photos of me at the top and Maria got one or two of both of us. I took one last look at Mt. Lang Tang from this high vantage point, a thousand feet or so above the glacier-carved bowl I’d climbed to the day before, turned away and headed down.