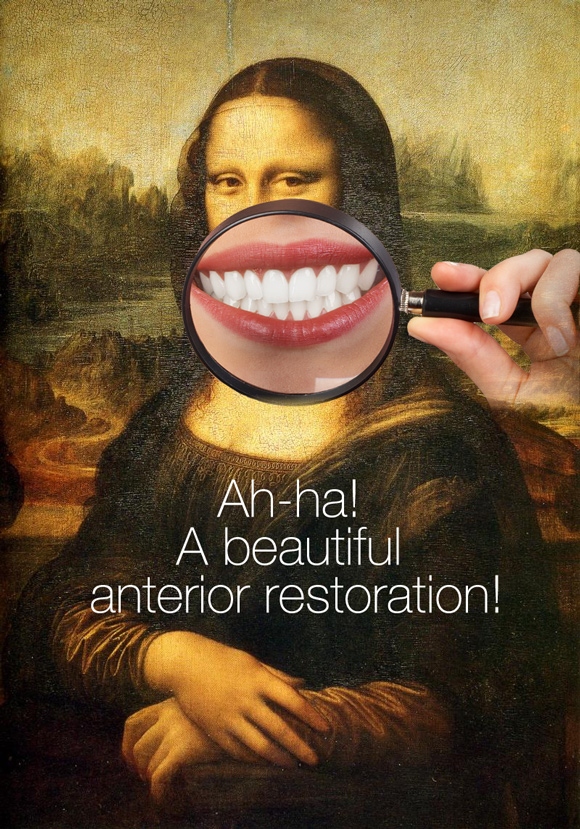 [dropcap]M[/dropcap]y wife and I went to dinner at a nice San Diego Harbor side restaurant a week or so ago with another couple–one of the finest dentists I know along with his wife. This man can perform dental artistry with a plastic instrument and a little composite resin that is simply mind blowing. And his patients’ smiles lead others to offer the perfect compliment. Not, “Gee, you have some beautiful dentistry. Who did it?” But instead the much better remark, “Your teeth are just beautiful! Such a great smile!”

If there is reincarnation, then this dentist was Michelangelo or Leonardo DaVinci in a previous life. He also happens to know at least a little about occlusion.

And, no, I’m not telling you his name.

From our table you could see the San Diego skyline and the Coronado bridge soaring over the bay. Waiting for the waitress to bring cocktails, I mentioned his apparent artistic talent. “You really think so?” he said.

“Are you kidding? I’ve watched you work. I think you’re Michelagelo with a dental degree!”

“That’s funny. I always thought of myself as Don Rickles with a dental degree.”

“Well, yes. There is that.” We both laughed.

“It’s interesting, though, this artistic talent,” he continued. “I think quite a few dentists have it. But they don’t go nearly far enough to develop it. There’s an awful lot involved in doing this work. It means going the extra mile, but then the last quarter of an inch too.

“I did a lecture at the local dental society recently. Showed slides of some of my cases. Showed my preps. Showed how I do shade selection, how I communicate that to the lab with precise color corrected photography, how I blend various colors and textures into the porcelain. How I use a microscope for the prep and finish. And a young dentist came up to me after the lecture. There’s always one or two of those, you know.

“’Listen,’ he says to me. ‘I honestly think I’m as talented as you are. I think I have your kind of eye for color and form. I’ve also attended good courses and I read the literature. I think I could do what you do. But I literally can’t afford to. I couldn’t pay for a master ceramist to do my lab work. I couldn’t afford to take the time you do. I have contracts with a couple of insurance companies. And now, Delta Dental is cutting reimbursement even more than before. My fees are limited by the insurance companies. And I need those contracts to maintain a good new patient flow. But, if it weren’t for that kind of restriction, I think I could do dentistry just as beautiful as yours. But what am I supposed to do?’

“I asked him if he was serious and he assured me that he was. So, I told him what to do. I told him to just pick one case. And to take the time to do the very best he could do, no matter the cost. I told him I’d even give him the name of my ceramist and tell her to work with him. He’s right about one thing, he really can’t afford it. His fee might cover his light, heat, water and staff salaries. He won’t cover the lab fee. And there certainly won’t be any money left over for him. He’ll do the case for free or worse. It will cost him more to perform it than he’ll collect.

“’But, don’t you see that that’s okay?’ I said to him. ‘You do a beautiful case. She shows off her smile for her friends and neighbors. She might even show another dentist. Do a few cases that way. Even if you do just two or three a year. If you really have the talent you say you do, then word will get around that you’re the man.’

“’I have to tell you that that’s what I did years ago. I couldn’t even afford the lab fees with what I was getting paid. I didn’t develop my reputation overnight. My lab work was delivered COD because the lab knew I might not be able to pay them. But over the years, it really did come together. You think you’ve got the talent and the guts to go for it? Then quit making excuses and do it.’

“’Then what? You develop the reputation. You drop the cheap insurance plans. You raise your fees enough that you at least aren’t losing money practicing as an artist.’

“He got a sort of glazed, faraway look in his eyes. The look of a dreamer. My ceramist will call me if the guy really follows through. I hope he does. If he really has the ability he thinks he has, then his patients deserve the best he can deliver. Meanwhile, I’m still waiting. Odds are, he’ll continue to do average—or slightly above average– work for average fees. But then maybe I’m a pessimist.”

We all ordered dinner and proceeded to have a nice relaxing time together. We talked about almost anything other than dentistry. But I never forgot the discussion about the dentist as true artist. What is the Michelangelo of dentistry to do? Would Rembrandt sign up with the Delta plans? 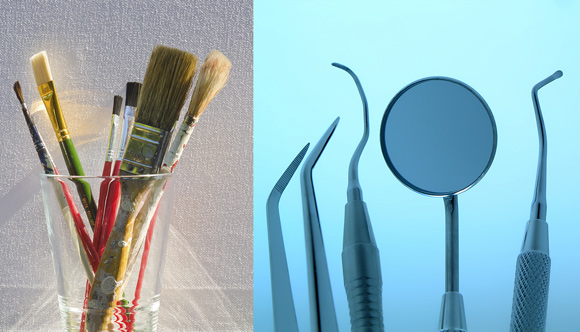 As for yours truly, I never thought of myself as an artist. Doing direct composite bonding that could make the cover of Dentistry Today was beyond me. I eventually was able to produce some nice looking anterior restorations, but that takes some real dedication, especially for those of us who wouldn’t be confused with Leonardo DaVinci. These days, I work with restorative dentists on getting their patients TM joints healthier and more comfortable before they embark on whatever dentistry might be needed.

But for those of you who do have the hands of an artist, I think my friend had good advice. Don’t let Delta Dental and other third party payers be the barrier between your artistry and your dentistry.

As I look back on that dinnertime conversation with my friend, a couple of pearls from Omer Reed, comments he made many years ago, came to mind. More than thirty years ago he said that in the future there would be four tiers of dentistry. First the government or welfare program, then the the high volume, low cost managed care practice. Next, the average dental office that relies mostly on insurance plans, and last—at the top—the very high quality, low volume, higher fee office. But the key, Omer said, was choosing one. Even if you think you can, you’re not going to achieve really high quality dentistry every once in a while in an insurance office. You need to choose one. Nothing wrong with any of the four choices. But choose one style of practice. And the future he foresaw is now.

He also made some rather indelicate remarks about dental insurance. “It’s not really insurance at all,” he said. “Just a rather limited pre-paid chit. But it will become less and less valuable over time and the insurance companies will make more and more of the rules. Best to get free of them.” And he added something just a little off-color about puppies weaning off mother’s milk, saying it was time for dentists to do the same. Easier said than done, I can attest.

But back to the dentist as artist, the man or woman in the top 3%, if you have the gift for it, try for those really high class results. Even if you max out your Visa card paying the lab fee. In the relative short term, that’s okay. IF…if it leads you to that higher level. I wish you success on that journey. 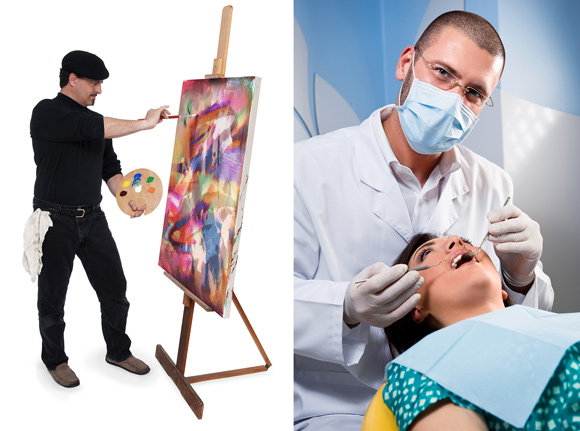