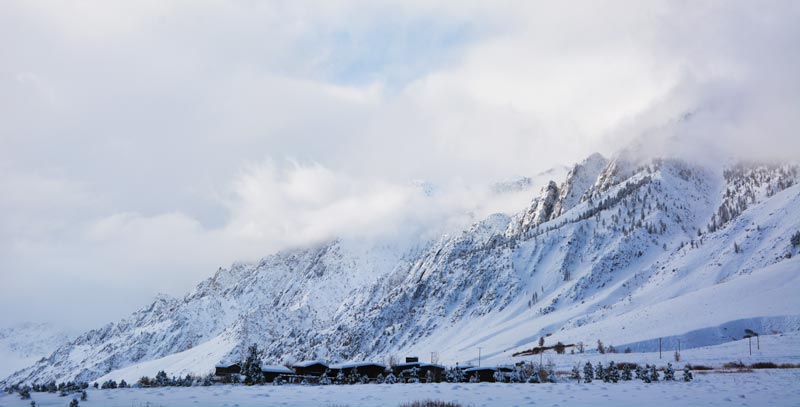 Back in February of 2019, just before the Super Bowl, a big snowstorm descended on the Sierra Nevada and blanketed everything in white. Our snowboard enthusiast nephews and nieces descended too, spilling into spare rooms everywhere in the house, two even flew in from Virginia having heard the news of the big winter blast.

“Meteorologists are calling this the Storm of the Century,” our nephew gushed, smiling and excited as a kid on Christmas morning, hardly able to wait to take his snowboard to the mountain.

“Well, look, it’s only two-thousand nineteen. Isn’t that a little early to be dubbing this the Storm of the Century?” I said to him, maybe thinking I’d calm him down a bit.

“No. This is it. It’s coming now. The Storm of the Century!”

And indeed it was quite a storm. It took me two full days to dig the Subaru out of the garage.

Now it’s late January 2021 and meteorologists, reporting out of Reno, Nevada, are proclaiming this storm the real deal, with snowfall totals in the high mountains literally off their charts, and about 10%  more snowfall totals than the 2019 storm. What can I say? Be careful before you indulge in hyperbole. And be careful before you believe it as it seems to be everywhere. 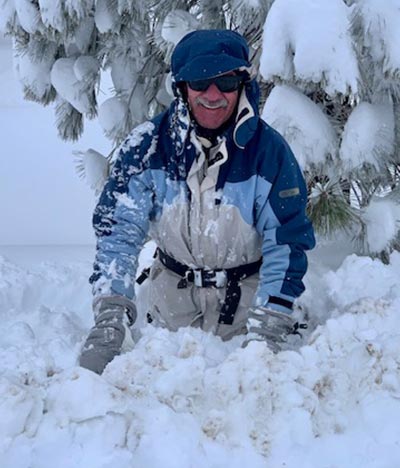 On Wednesday, the weatherman called the storm a blizzard, though I’m not sure it met the criteria: sustained winds above 35 mph, blowing snow and visibility a quarter mile or less, but of course Andrea and I went walking in it. Visibility was poor, close to white-out conditions at times. But all criteria for ‘Blizzard’ met for 3 hour or more? Perhaps an exaggeration.

The roads were not plowed but were walkable. The fields just off the roads much less so. There I am walking easily enough and in the next moment waist deep in snow.

I think of Jack London and his wonderful short story, To Build a Fire. Maybe his best, would you agree? Did he take a walk like this one in bitter cold and imagine how it might be to try to make it 10 miles to the next village only to be stranded in cold and try to build a fire with fingers so cold he could not hold a match, and then try striking matches by holding them between clenched teeth? Remember? Or if not, dig out that story by a fireside and be reminded.

Or maybe the cold, with wind whipped clouds of snow so hard and pounding, makes you think of Robert Service, Whitehorse bank teller turned Yukon goldrush poet and his ironic and twisted, Cremation of Sam Mcgee. Ah, burning there in a stove the corpse proclaims, “Please close that door…Since I left Plumtree, down in Tennessee, it’s the first time I’ve been warm.” 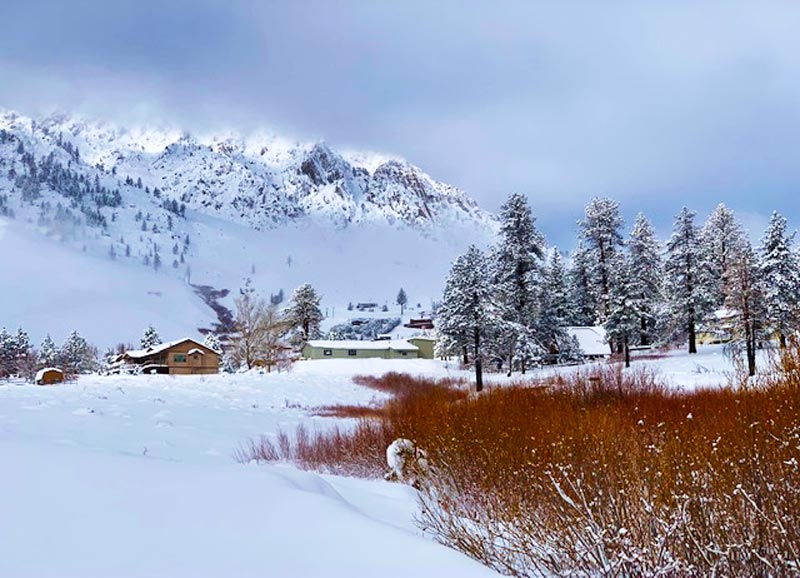 My hands are painfully cold on this walk, no more than a mile or two from home. Can I get frostbite on so short a walk? Perhaps not. Home is only a short distance away, and surely the fire I started in the woodstove this morning will still be cheery and bright, the living room warm. We say hello to neighbors, those few who are braving the storm, and head for home.

Thursday morning, the snow was still falling, and in fact would fall all day and night and into Friday morning, but walking that morning was much more pleasant. I dig out a book of poems, surely someone, perhaps Emily Dickinson or Ralph Waldo Emerson has written of a morning like this one: there’s a promise of sunlight, clouds are heavy but here and there are breaking, and the wind is not so cold. But no one has yet shown you a morning such as this.

More than a million of you visited this site in 2020. I know perhaps a few hundred of you. What were you searching for? Is there something I can give you?

High on the Wheeler Crest the sun lights one high peak, and only for a moment. Andrea and I both catch it gleaming in our cameras. What do I think of? A mountain peak, an actual mountaintop of granite and then the metaphorical, the mountain so many of us—all of us?—seek to find.

Suddenly I remembered a letter to the editor of a dental publication that a young dentist wrote just a few weeks ago. He’d worked as an associate (an employee, basically) of an older dentist for several years and then had ventured out on his own, where he has now floundered for two years. He collects enough money to pay the office light, heat, rent, and salaries, but has not yet cleared enough to pay himself. “When does it get better?” he moaned. And he received advice from other readers. “Let people know you’re a dentist, carry your cards with you, wear your scrubs outside the office, to the store, to the restaurant. And sign up for every insurance plan you can find. Get more patients that way.”

Oh, God, NO! I said to nobody. Wear scrubs outside the office? Especially now, in the middle of a pandemic? Good Lord, what an awful and tasteless idea.

And sign up to be the provider of various insurance plans? Oh sure, there you go, young man. Your overhead is already 100% now let an insurance company discount your fees 30%. Great idea. That way you can go broke even faster.

Oh, how Andrea and I would love to sit down with this young man. Could we rescue him from his disaster in the making? I’d like to think we could. At least our advice would be better than what he’s received so far. But before giving advice, we’d ask questions. How exactly did he get himself into this predicament? There is a mountain top. Though mostly cloud hidden, it is in sight. I can see it. Maybe no one has reached the very top in this life. But many have climbed high on the rocky flanks. Andrea and I have been there. Can we show the way? As Browning wrote, A man’s reach should exceed his grasp, or what’s a Heaven for?

Oh, to be your own boss; it must have seemed a worthy dream to this young dentist; certainly, it seemed a worthy endeavor, but, as you may have heard, nothing is quite so easy as it looks.

And do you have your own personal mountain? Do you have it in sight? 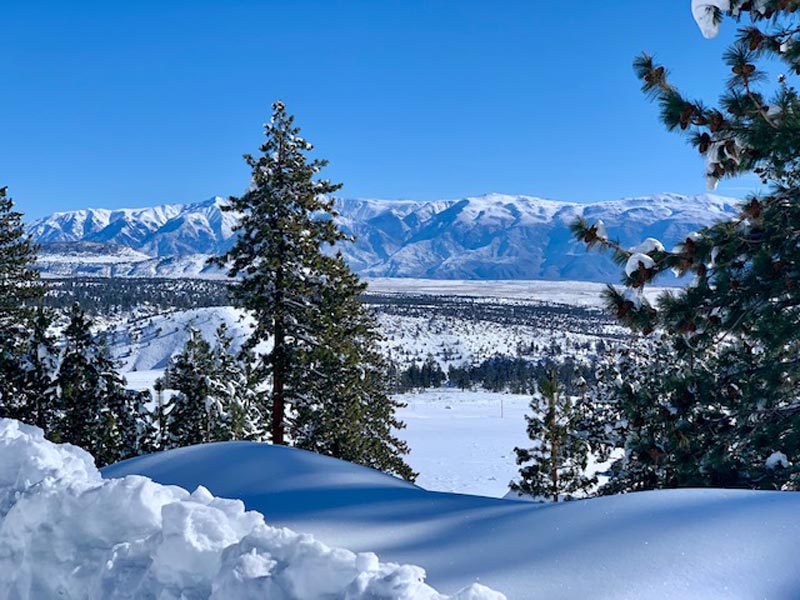 Three days after the storm, the morning breaks clear, sunny, with bright blue sky, though still quite cold. Now we can see the full effect of the storm. A few folks are beginning to dig out, and some still need to. The thermometer on our deck reads 10 degrees Fahrenheit. We walk farther today, seven or eight miles, up high even into an area of avalanche danger. I see doorways piled high with snow and remember one time as a kid on a Wisconsin farm when we had to climb through a second story window to get outside and then grab shovels to begin clearing the snow from the farmhouse door. Not many are that deep in snow today, but not many are going to drive anywhere anytime soon. At least the roads are plowed now, though I hear you can’t drive north and access Highway 395 to Mammoth Mountain from here. Surely with another day of sunshine it can be done. 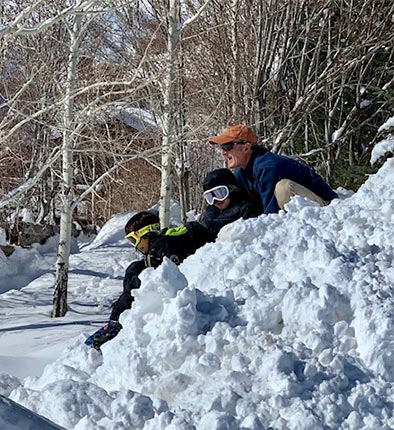 Meanwhile, two young boys and their father have found a good slope of snow not far from their door. They have a sled. Father helps them get set and then sends them on their way. Too soon they turn the sled over and crash in heavy snow. They scramble up the slope and go again. And again. At least once they get a good run down the hill. Then I watch the younger boy crawl on all fours back up to the top while big brother carries the sled. Digging out can wait, can’t it, Dad? They seem to say.

Although freezing cold when we started this walk, a few miles from home we’re both shedding coats and gloves. My goodness, it feels downright hot! When we get home, Andrea opens a few doors. “It’s just too warm in the house,” she says. But then I go out on our back deck for a look at the thermometer. “Don’t leave the doors and windows open too long,” I call to her. “It’s twenty-eight degrees out here.” 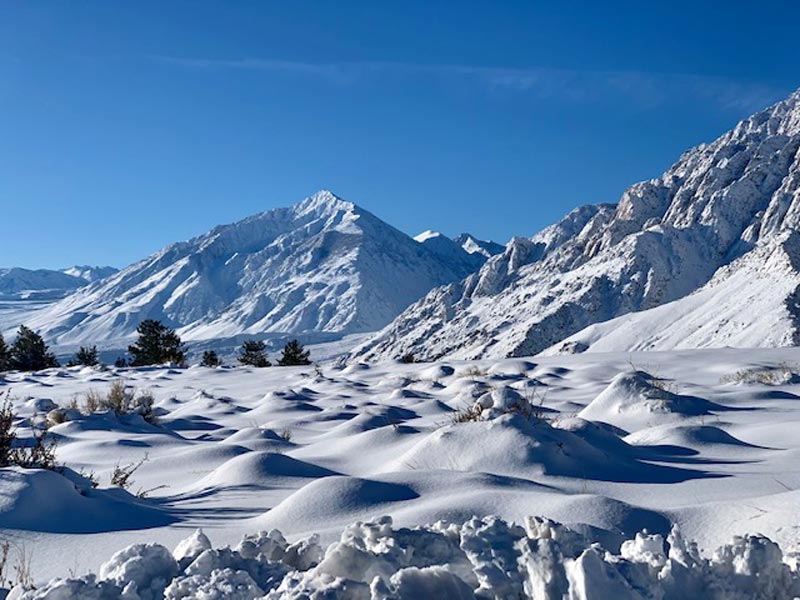