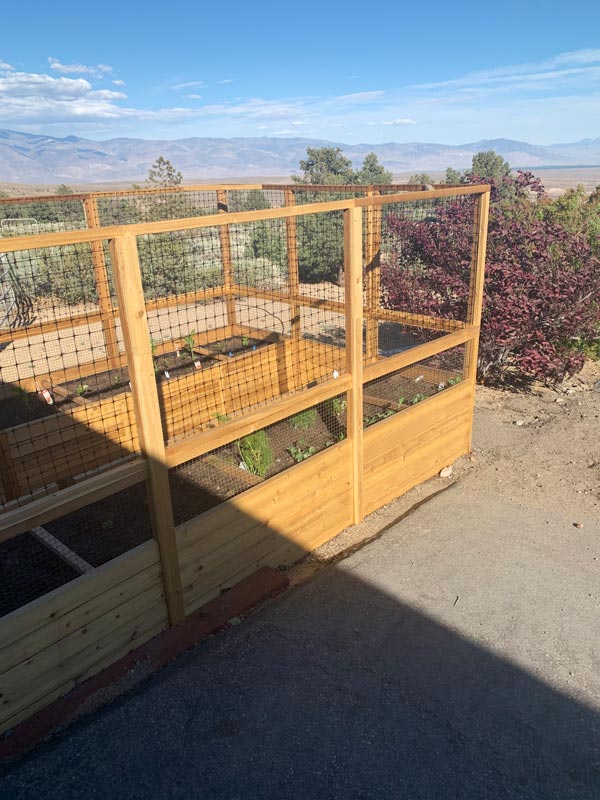 I started to write a humorous piece about the storm; after all, couldn’t the extreme screw-up on the part of the weather service be food for a bit of ridicule? But then, the missed forecast turned serious for a hiker on Mt. Whitney that Thursday night. And there were gardens lost when high altitude gardening fell victim to weather that no one saw coming.

And is there any correlation to the sudden storm in China that killed 21 runners in an ultramarathon a day later? It certainly wasn’t the same storm, but it also was not forecast, and the sudden appearance of freezing temperatures and a driving hailstorm proved tragic. Sometimes the forecasters simply miss it.

We’d planned a garden in December and by April I had the raised beds built and filled with clean dirt and topsoil as well as soil augmented with chicken manure for fertilizer. Since March Andrea had seedlings—count ‘em, 75 I believe—growing in the bathroom where we figured there was adequate heat and light even with a little of winter’s snow still on the ground outside. It turned out, by the way, that the little darlings could have used even more heat and light, but so be it. In early May, we started hardening them to the outdoors by taking them outside for a few hours a day, then back inside each night.

By Thursday May 20, they were living and growing outside all day and night. Soon, we said, we’d plant the garden.

A neighbor, who is a degree carrying horticulturist, visited on that Thursday. He had already planted his rather extensive garden, with a good potato crop thriving.

“You know the weather service is calling for a winter-like storm tomorrow night and Saturday. So, you best delay planting for a few days.”

“Yes. I read that too,” Andrea told him. “Tomorrow I’ll bring our plants back inside and wait out the weather.”

“I read that they’re expecting temperatures in the 20s,” he said. “But I’ve gardened here for a few years and I suspect that they are wrong. This time of year, I doubt it’ll get lower than 34 degrees.”

We wished each other luck.

How, with modern technology, especially satellite imaging that can spot those storm fronts moving in from the Pacific, can the forecasted time and timing of a weather system be so wrong? I awoke early Friday with the house very cold. I peered out my back window and switched on an outside light. What was that white stuff all over the deck and what was it doing here a full 24 hours early? I stepped out the door. My bare feet know the feeling of freshly fallen powder when I step into it. The thermometer on the deck read 25 degrees.

When it was light enough to see what we were doing, we brought all the young plants back inside where they would stay for the next two days and nights. A swirling snow fell all day Friday. I lit a fire in the woodstove. Andrea called our neighbor. “I think I lost the whole potato crop,” he said. “A few other things too. My lettuce won’t make it. How about you?”

“I think we lost most of the seedlings. Only about fifteen of them survived. What do you think? Should I trim off the leaves that are frost bit?”

“No. Just leave them alone. Then you’ll just have to watch and see which plants make it.” His voice sounded somber. It had not been a good night for him.

I don’t know why but my thoughts turned to Maurice Herzog and Annapurna. I also thought of Into Thin Air, Jon Krakauer’s account of the Mt. Everest tragedy of May 1996. A few lost plants were nothing compared with real cold, lost fingers and toes, lost lives, and yet the images came to me just the same.

On Sunday I heard that a hiker had become separated from his climbing partner on late Thursday in a sudden and unexpected winter storm in the Sierra Nevada, on the slopes of Mt. Whitney. It turned out that he was found alive this week but only after spending three nights in sub-freezing temperatures alone on the mountain.

And then on Monday I read about the runners who died in the winter-like storm in China when the sudden cold descended upon them.

For us on Monday, the weather finally Springlike—though sometimes a cloud cover hid the sun and made us aware of how quickly we could become chilled—we planted what had survived. Some of those damaged plants are still iffy now.

The garden, planned for months, is in, fingers crossed. Perhaps in a month or six weeks I can write The Garden, part II and show pictures of a surviving vegetable crop.

Where else has the metaphor been drawn? Call of the Wild, by Jack London is one, though of gold not zucchinis, Steinbeck’s Of Mice and Men is another. But then, best I think to paraphrase Maurice Herzog and Annapurna: there are more failed gardens in the lives of men.