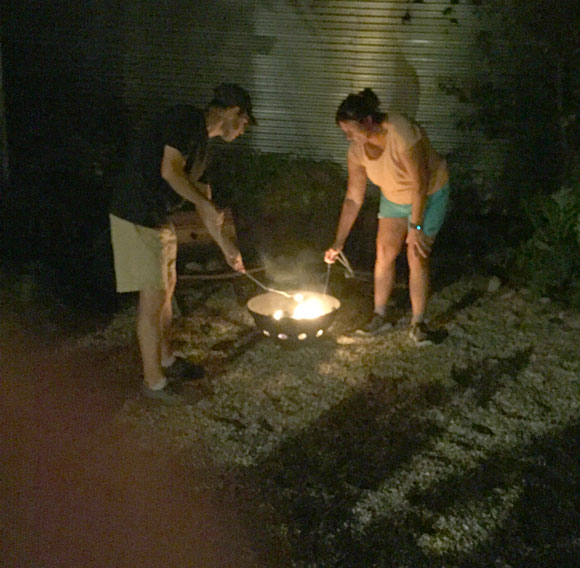 The idea germinated during a combined family camping trip in the local mountains over the summer. After all, what do you do on a campout? Roast marshmallows over a campfire, slap the softened, browned or charred result on a graham cracker, add half a Hershey bar, let the chocolate melt a bit, enjoy. Repeat.

There are thirty published variations on this theme, and perhaps hundreds unpublished.

My first foray into the variations involved Reese’s Peanut Butter Cup in place of the Hershey’s. That baby still makes my top 3 list, with or without the banana slice.

I don’t remember who came up with the idea first, but whether I did or whether it was my neighbor Dennis, we hit upon the plan of a marathon S’mores taste test involving dozens if not hundreds of combinations. This would be done over at least two nights, perhaps even stretch into a couple of weekends.

And the perfect time for such a test? Halloween of course. What other time of year would there be so much candy in our houses and of such variety?

So on a summer night all those months ago, the plans were laid. The five of us, Andrea and I and our neighbors Dennis, Tracey and eight-year-old Justin headed to our respective tents in adjacent campsites, the campfire still flickering, the taste of Hershey’s still on our tongues, the goo of melted marshmallow barely wiped from our fingers. 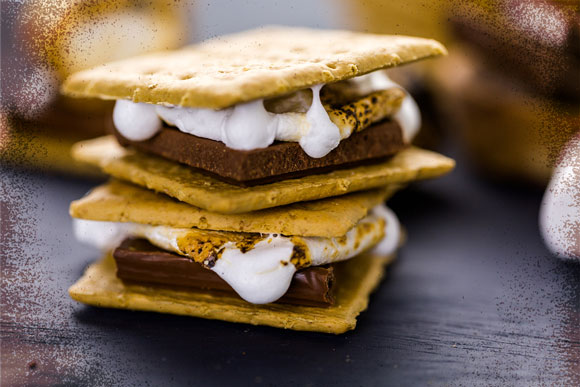 Our October taste test carries some risk of course: Tooth decay, indigestion, diabetes, sugar high followed by the crash, sugar addiction. And so I offer the following as a public service so that you won’t have to repeat this at home.

Halloween still three nights away, game three of the World Series on, Hillary under investigation, The Donald shooting himself in the foot yet again, dappled white clouds in an early evening sky, Tracey texts Andrea: “We have a tremendous collection of candy, more than we’re likely to give out. How about that S’mores taste test?”

So I lit a fire in our backyard fire pit and we married our candy fortunes together.

My nephew swears by his favorite recipe which involves soaking the marshmallow in alcohol—Irish Whiskey is his favorite although a little Captain Morgan’s has been known to do in a pinch—and then flaming it well and doing the usual Hershey’s and graham cracker bit. A little like bar hopping without needing a cab ride home.

So a little booze was on the agenda.

We scattered Reese’s, Milky Way bars, Rolos, Twix, Kit Kats, 3 Musketeers, Baby Ruth, Butterfingers, Almond Joy, and a few bars of gourmet fine chocolate from Whole foods on the wood table next to the barbeque, straightened out a few clothes hangers and started out.

I tried my nephew’s booze soaking a few times with dips into Grand Marnier, peach schnapps, and Kahlua. The peach schnapps soaked marshmallow had a mildly pleasant flavor and yet understated. If the S’more was a wine you could call it light bodied to be polite. It was simply over-subtle, maybe like a Wallace Stegner novel.

Grand Marnier completely overpowered whatever flavors of chocolate or caramel it was combined with and left a surprising hot taste on the tongue. I thought this one would be good, but it was a non-starter.

Kahlua and chocolate made for a reasonable combination, and yet I found it lacking. Too light bodied with a weak finish.

In the end, I thought that the outcome of booze-soaked marshmallows roasted over an open fire and smashed onto chocolate a rather interesting idea but in practice disappointing and even a little bitter in its aftertaste, basically reminding me of the 2016 Presidential election.

Andrea liked a gourmet chocolate bar, the Green and Blacks King bar (dark chocolate with 85% cacao content!), but with chocolate that rich, the marshmallow was never hot enough to soften it even a little. She employed what to me was a cheating strategy of doing the S’more the usual way and then putting it in the microwave for a bit. Look, if you can’t do it camping, I don’t think it counts.

Still that rich, full bodied, better-than-the-rest S’more got her vote. 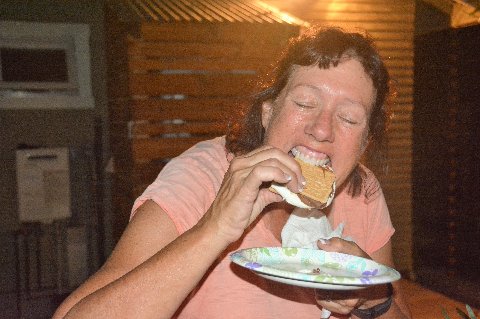 With input from Tracey, Dennis, and Justin, the top of the list combined chocolate and caramel, but which one? There are several candies after all that combine those sweet ingredients. Baby Ruth,Twix, Rolos, Forever Yours.

After I had downed a dozen or so S’mores and everybody else had lost count we adjourned for the night with a promise to continue the next day.

Saturday, two nights before Halloween, Dennis, Tracey and Justin arrived with plastic bags filled with even more goodies. I had a fire going. We started sampling. Dennis checked the score of the ball game on his cell phone once in awhile and let us know that it didn’t look good for the Cubs.

I liked the crunch and sweetness of half a Butterfinger bar with my graham cracker and lightly toasted marshmallow. Milky Way S’mores were a hit. Almond Joy didn’t make the cut somehow, and Nestle Crunch didn’t have the same rich full sweetness of Butterfingers.

Anything with nougat, that combination of honey and roasted nuts with whipped egg white went a bit over the top and the simplicity of good old chocolate with a nice blended caramel seemed to be the crowd—okay the five of us—favorite.

Lots of bars have that combo, but it was Rolos that seemed to grab just the right combination of chocolate and caramel we’d been looking for.

Eight year old Justin claimed that Rolos combined with Twix on the same cracker was the best.

The consensus among the five of us was that Rolos were the bomb. It has a superior flavor to that old standby Hershey’s every time. Reese’s Peanut butter Cups garnered an honorable mention, and Butterfinger Bars managed to make the top five list. 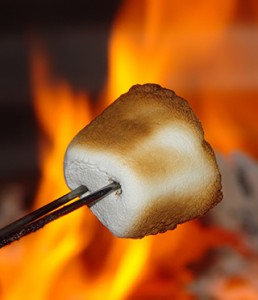 Going camping? Got S’mores on the list? Go for a little variety. Take Rolos, Twix and don’t forget the Reese’s. Gotta be campfire heaven.

We all thought the idea of substituting Oreo Cookies with candy corn for the graham crackers was an interesting one, but didn’t get around to trying them.

We ended up putting a moratorium on S’mores for awhile, all of us over stuffed after our evening of unscientific testing. But Christmas is coming; visions of red and white candies and the taste of peppermint dance in our heads.