I’m sitting at the edge of Thousand Island lake; it’s the 28th of May, 2015 a few minutes after noon on a clear and sunny spring day. The lake is largely frozen over and just beyond its white and splintered surface towers Mt. Banner, its slopes lightly dusted with a powdered sugar coating of fine snow.

In most years, late May would find this spot buried under several feet of snow, but I’m sitting on bare earth. I listen to the three-note song of the mountain chickadee and the high pitched whistle of a fat brown marmot just recently aroused from hibernation and now doing his best to sneak a bag of Fritos from my pack.

It is an early spring and the Sierras have their lightest snowpack since the winter of ’76-’77.

The severe drought of the 70s must have made for a million dinner time conversations. Restaurants displayed little plastic signs on every table, “Due to the drought, water will be served upon request only.”

In 2015 the same signs, a little aged now, are back on the tables. They must have been tucked away under the silverware ready to be dug out when the state’s figurative well went dry again.

And the wells were bound to go dry again. What, at the state level, was done between the dry spells? How slowly does a legislature and governor’s office really run?

Apparently bureaucracy does run slowly except when it does the wrong thing. The U.S. Bureau of Reclamation and various California agencies recently released millions of gallons of water from northern California reservoirs in the name of helping fish migrate and to make the water temperature a bit cooler and more conducive for them. During this years-long drought, the state has actually released Billions of gallons of fresh water into the ocean.

I spend a good deal of time in the outdoors, and of course I want clean air and water and to protect wildlife, but even James Madison realized that the protection of society and human life took precedence over what he called “factions” whose agendas could be harmful. And it would be the future Republic’s job to know the difference. At least that’s how I interpret Federalist 47. It seems to me that distinction has been lost or forgotten.

The state government that is asking Californians to let their lawns die has, by deliberate intent, forced central valley farmers to leave several hundred thousands of acres uncultivated. This will result in the loss of an estimated 20,000 jobs in the state. And since the central valley of California grows a sizable percentage of all the fruit and vegetables for the U.S. as a whole, Government action this spring will cause a nationwide increase in food costs.

I listen to flowing water. A big river, the San Joaquin, begins here. Its source is Thousand Island Lake. It is fed by the melting snow above, and nearby Shadow Creek thundering down from Shadow Lake and other high lakes. The river runs more than 360 miles to the agricultural rich San Joaquin Valley, and along the way is fed by other rivers: the Fresno, and Merced; the Tuolumne, the Stanislaus. The water beside me, only beginning its journey, is a rush of tumbling, splashing water hurtling down.

The San Joaquin is California’s 2nd largest river and the most important in the central valley. At one time an untamed river, the San Joaquin turned the valley into a mired marshland with the snow-melt and the torrents of spring. In some years, a couple of hundred years ago, the valley flooded and became an inland sea.

To anyone watching the river on this spring day it would be apparent that there will be no flood this year. The mountainsides here in the Ansel Adams Wilderness have the look of July or August. The torrents of spring are indeed running down from the heights, but they will run for only a short time. The drought of 2014 and 2015 has left the mountains with a fraction of their usual snowpack. This year’s melt will be fast and brief. Farmers will be hard pressed to irrigate their crops and people from Stockton to Manteca and Tracy will worry about water.

Once the San Joaquin Valley was a flooded alluvial plane. That all changed when a few men saw the potential for abundant farmland if only the river could be controlled. The story of the river, at least since gold rush days, is a story of court-room battles and channels and diversion and irrigation and dams and reservoirs and hydroelectric power.

Today, the San Joaquin remains the most regulated, fought-over, litigious, controversial river in the U.S.

In 2014 the people of California voted in favor of Proposition 1, the Water Bond Initiative. Under guidelines established by the proposition there are no fewer than 15 specific projects planned to increase water storage capacity as well as to prevent waste in existing infrastructure.

The obstacles to actually initiating the projects are myriad and include the fact that each individual project will require the approval of at least three separate state and federal agencies, and that means delay.

The biggest pending project is the Temperance Flat Dam. This dam is planned above the existing Friant Dam and Millerton Lake on the San Joaquin River. 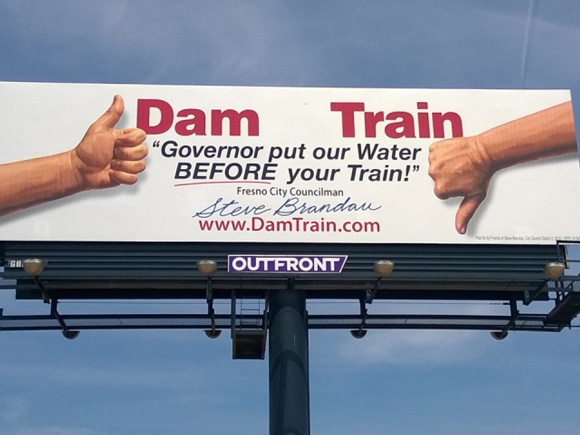 The proposed dam and reservoir would double the amount of water stored for future dry years. But the dam faces harsh opposition and the issues are complex and the truth is there is no clear-cut answer to the controversy. There can be no benefit without cost. It will be up to multiple government agencies to do a cost/benefit analysis. The people of California can only hope that such a bureaucratic process can be completed in, oh, thirty years or so.

I’m watching the river flow out of the frozen lake and thinking about government and remembering the past. The drought in the 1970s was similar to today’s. Back then, the government even suggested we not flush after every bathroom use–just once in awhile. The state did have some water projects in the planning stages, but a funny thing happened on the way to statewide increases in water storage and conservation. The problem went away–or so it seemed.

I still remember the morning in late 1977 when one of our friends stopped by the house, obviously excited. “Weather satellites show a whole series of storms, maybe seven of them! They’re marching one after another across the Pacific. Looks like the drought’s over!”

And he was right. The drought completely reversed the following year and there was plenty of rain and the Sierras enjoyed a heavy snowpack. People have a short attention span and the worries about water evaporated, so to speak.

California State Government took a few small steps to improve water conservation but no new storage capacity, no large scale projects. It was as if the entire state heaved a tremendous sigh of relief. Problem’s over. No need to get too excited. A statewide referendum on a project called the Peripheral Canal to move Sacramento Delta water to areas in need garnered less than 40% of the vote.

I have read the descriptions of proposed water projects that can be financed by the bond issue passed last year. None are completed and some are still being debated. All of these projects would have been appropriate in 1976. Most are good ideas now, if only 40 years too late.

I watch the San Joaquin flow from its High Sierra beginning and formulate a theory of government. Government action is almost always too little and much too late. But, somewhat ironically, governments sometimes act very hastily and then the results can be catastrophic and sometimes comical. I’ll leave it to the reader to think of examples–that shouldn’t be too hard.

Climatologists are reporting that the El Nino condition in the Pacific, the phenomenon that creates winter storms in the west, is stronger now than at any time in the last four years. The drought should end–maybe as early as next year. Will the state government then shrug its collective shoulder and shelve water projects for another decade or two?

I could recommend Cadillac Desert, by Marc Reisner. He sounded a stern warning in 1986 that water would become a major concern in the west. It seems that his warning has been largely ignored. His thought all those years ago was that the experiment of bringing large numbers of people to live in the desert or semi-desert of the American Southwest was simply doomed to failure in the long run. There are cities, he believes, where no city should exist. His major point though, brings home the old adage about sausages and laws: you don’t want to know how either one are made. In his book you get a pretty fair idea how laws are made, and it’s a disturbing sight.

Now, what does failure in the long run look like? For that answer, you could turn to The Water Knife, by Paolo Bacigalupi. The book is a science fiction story of a dystopian near-future after a decades long drought, a time when local water departments, where they exist at all, are run by Mafia hoods or gun, knife and bomb wielding thugs from the Sinaloa Drug Cartel. A dark and violent book this, and not an especially fun read. I couldn’t put it down.

The Wall Street Journal, in its review of The Water Knife calls it required reading for all California politicians. Perhaps. But only if you want those folks in Sacramento to lose lots of sleep.

Watch the news. Does central California get a new dam on the San Joaquin or not? Will water storage and conservation be taken seriously at the state level, and I mean beyond telling us all to take shorter showers?

Officials in the central valley are clamoring for the Temperance Dam. Will it be built, or will the next rainy season put it on hold again–until the next crises period of little rain and scant snowfall?

I hate to admit to being in sympathy with Governor Jerry Brown, but he is stuck between wanting to please the environmentalists and making practical decisions about water needs in the Central Valley and Southern California. I’m a backpacker, hiker, ocean kayaker, a lover of wild places and wild rivers. But I also appreciate the perils of farming in a land of little water. Am I an advocate for environmental policies or am I on the side of Central Valley farmers who will take what water the tax-payer subsidized projects can provide? Yes; both. Perhaps some common sense practicality can take hold.

Dr. Halligan’s newest eBook shows doctors how to produce night guards that require far less adjustment and are much more comfortable for patients. It is entitled, Night Guards: A bad idea or an idea badly done?