When a new patient comes to my office with complaints of TMJ pain, facial pain, limited opening and so on, one of the questions I ask is, “What do you believe caused this problem?” The most common answer is, “I don’t know.” But the second most frequent answer is, “My dentist! It all started when he did that crown.”

For patients with a closed lock of the TMJ (see my last article), recent crown preparation or endodontic procedure is almost always the cause in the patient’s opinion. And the patients may be correct. Holding the mouth open for a long appointment, even if bite block is used, seems to sometimes cause a total anterior displacement of the articular disc and closed lock.

But why? It certainly seems counterintuitive that holding open would cause the jaw to lock shut. I did a literature search on this subject recently and some published literature even states this fact: the exact mechanism of total disc displacement and resulting closed lock is unknown.

In this article I’ll advance my own theory, and if I am correct I think I can give you hope. I believe the patient with a predisposition to lock closed leaves clues in advance. You’ll simply have to look for them.

Let’s look first at a probable mechanism of the closed lock and then I’ll share the clues with you.

The shape of the articular disc has been described as “biconcave.” That is, it has a concave inferior surface and the head of the condyle fits into that inferior concavity in a normal joint. The superior surface of the disc is also concave and the concavity rests against the articular eminence. Pay attention to a couple of details. The lateral pterygoid muscle has its origin on the greater wing of the sphenoid bone, just behind the eye. It insets onto the mandibular condyle and also has insertion on the disc itself. The portion of the lateral pterygoid that inserts into the disc is called the superior belly. It is the job of the superior belly of the lateral pterygoid to guide the disc along with the condyle as it translates down and forward on the eminence upon opening and then back upon closing. Second, notice that the posterior portion of the disc is rather thick. It appears to be designed NOT to slip out of place. Even if the superior belly of the lateral pterygoid exerts forward force on the disc, it will tend to center itself. That’s part of the genius of the biconcave shape of the disc. Even if you perform a lengthy procedure on a patient with normal joint architecture, and even if the lateral pterygoid fatigues and spasms, there is almost no likelihood of a problem. That disc is not going anywhere. The self-centering mechanism will keep it in place.

Now look at figure 2. This drawing shows a condyle that is slightly displaced to the posterior with the head of the condyle resting on the thick posterior band of the disc. How does that happen? Well, often it’s simply growth and development, although there are a number of possible causes too numerous to discuss here. That means maybe the fault lies in Mom and Dad’s genetic makeup. Not much you can do about that. It is sufficient to say that in some patients, the condyle is too far back toward the ear, and the result in time is a thinning of the posterior band of the disc. The thickened band that in a normal situation prevents disc displacement is now compromised. What if a patient has this kind of compromised disc and the lateral ptergoid goes into spasm during a dental procedure? That’s right. Without the thick posterior band, that disc has the potential to go completely out of place.

Now the disc is totally displaced. In the literature this is termed a Piper stage 4 displacement. This is the situation that can cause a closed lock of the TMJ. Even if the jaw does not lock closed, with a total displacement, the patient has just gone from having a minor partial displacement that may have even gone unnoticed, to having a much more serious problem. And it all started with that crown preparation or root canal, at least in the patient’s mind.

The patient with a joint such as shown in figure 2 is an accident waiting to happen. Is it possible to spot this patient in advance? I believe it is. 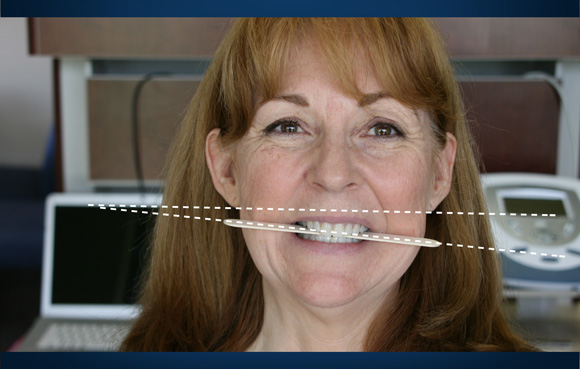 The canted frontal occlusal plane. To check for this, simply place a tongue depressor just behind your patient’s canines and ask him or her to close. Then look. Is the tongue depressor essentially level with the patient’s eyes, her ears, with the floor? If not, if there is an obvious cant to the frontal plane, then there is a very good chance that the patient already has a displaced disc—if not a total displacement, at least a partial one. The European literature states that if there is an obvious canted frontal occlusal plane, there is a 76% chance of a disc displacement. This simple 10 second test is very valuable.

Range of motion: How well does your patient open? Use your Boley gauge, or better yet a Therabite range of motion scale and measure inter-incisal opening. The literature states that 42-52 mm is normal. Your patient can only open to 35 mm or possibly less? There could be a problem.

Deviation or deflection upon opening. Can your patient open in a straight line, or does her chin deviate or deflect to one side when she opens? That’s not a muscle imbalance; it’s a partial or total disc displacement. Audible clicking or popping on opening also makes your patient a suspect.

Tenderness of the joint capsules, the masseter or anterior temporalis muscles upon palpation is another clue that you may have a patient with a brewing problem.

The presence of any one of these signs alone is not enough to tell if your patient has joint pathology. However, if there’s a canted occlusal plane, and limited opening, and deviation or deflection upon opening I would warn you to proceed with caution or not proceed at all.

It is not unusual for an endodontist to phone me and say, “I have a patient who needs emergency endo, but I also think she may have a joint problem. I’m going to open the tooth, medicate and temporize. I’ll have rubber dam on no more than 15 minutes. Will you then do your exam and treat as necessary? I can leave her with Cavit in the access for three months if need be. Then I can finish the endo.”

That’s a smart approach. I certainly suggest that when faced with a “suspect,” you delay major dental work until the status of the TMJs can be verified. Proper treatment, including appliance therapy if that’s appropriate before you reach for the handpiece can save you and your patient a good deal of grief.