I am happy to report, that my new night guard is working perfectly and my jaw did not pop/crack this morning.

Thank you so much!”

Now that’s a nice e-mail message to receive. It came from a patient who had been awakening with pain, clicking and locking. And that was true whether she wore her existing night guard or not. After delivering a new and specially designed night appliance—I think Night Guard would be the wrong word—I received that message the next morning. Cool.

When I posted the article, “Night guards, a bad idea or an idea badly done,” I had no clue that it would quickly become my most widely read post. With over 400 hits over the past 3 days, there are people from all over the world reading that post every day. The article has even topped something over 200 hits in a single day. That adds up to a lot of people sitting at computers and tapping out questions then landing on my site. And what kinds of questions? As many as 200 a day are about night guards.

If you’re a dentist reading this, I think that should cause you some concern. People out there are having lots of trouble with night guards and wondering why. And, instead of asking you, they’re turning to the internet.

Thanks to the marvels of Google and other search engines, I can see what keystrokes led each person to my site. Some Google searches are obviously from dentists (“Best way to do bite registration for night guard” e.g.), but the majority are from patients—maybe your patients. Typical Google entries include “My night guard gave me TMJ,” “Night guard made my TMJ worse,” “Night guard hurts,” Night guard isn’t working,” “Will over-the-counter night guard help TMJ?” “My night guard doesn’t work anymore.”

You get the idea.

Most of those hundreds of internet searches boil down to just a few common questions or comments. Here are the top five.

1. Will a night guard help my TMJ?
Good question, because a night guard properly done can help with symptoms of TMD. So jaw muscle tension and pain, temporal headaches and so on might be helped with a night guard. The key phrase is ‘properly done.’
However, an actual internal derangement—which generally means an anterior disc displacement—will require daytime as well as nighttime positioning and stabilization. A night guard alone will not be enough.

2. Can a night guard make my TMJ worse?
Yes. Again, if there’s an actual internal derangement, then a night guard alone will not solve the problem, and if done improperly can actually impart undue stress on an already compromised joint. If there is no joint pathology, but simply a nighttime bruxing or clenching habit, then a badly done night guard can exacerbate that as well.

3. Do I need a night guard?
That’s a tough question to answer by e-mail as you can imagine. A dentist would look for obvious tooth wear, and then ask himself a few questions. First, is it really attrition, or could there be another cause, such as esophageal reflux? And is that being addressed? (Consider possible obstructive sleep apnea.) Next, are there occlusal issues that should be corrected, lack of canine guidance e.g.? Another sign that points to likely clenching or grinding are lingual tori and maxillary exostosis.
If you’ve just done 6 or 8 all Empress anterior crowns or veneers, you certainly want to protect them. Nothing wrong with a well-constructed night guard in that case. But, as I mentioned in the night guard article, if a person has proper occlusion and canine guidance, there is usually no need for a night guard.

4. Why do I grind even harder on my night guard?
This one comes up a lot. Most of the night guards I see allow for really hard posterior contact, i.e. the back teeth contact the plastic of the night guard very firmly while the anterior teeth contact lightly or not at all. This is not going to help a bruxer. What’s worse is the fact that one side usually hits harder than the other. That is to say that the right posterior teeth for example may hit with double the force of the left back teeth while the front teeth don’t touch. That stimulates the muscles to clench and grind all the harder.

5. Can an NTI change my bite?
NTI stands for Nociceptive Trigeminal Inhibition. Very clever name. I don’t know how often the NTI causes an anterior open bite—a situation where the front teeth don’t touch and only the very back ones do. And yet I see it in my office frequently. And, by the way, I’m not even sure why it happens. When I asked the developer of the product, Dr. Jim Boyd, about this he told me it is because the NTI seats the condyles up and back. That sounds like a possibility, but that’s not what I’ve observed. On a few NTI users with anterior open bite, I did joint x-rays with the patient’s NTI in place. I found that in each case the condyles were down and forward. So Dr. Boyd’s theory doesn’t hold. In a few cases I could see that that lower central incisors were actually intruded. But that wasn’t always the case. Bottom line: I think the NTI may be a good diagnostic tool or a reasonable short term appliance. I fabricate NTIs occasionally, but recommend them for only a couple of weeks. I believe the device puts too much pressure on too few teeth and can lead to trouble.

The real problem with night guards as I see it is that too little thought goes into making them.

A dentist thinks a night guard would be a good idea for a particular patient. He instructs his assistant to do an upper alginate impression and sends the model to the lab with a prescription for a vacuum-formed night guard. The lab will return a plastic mouth guard that duplicates the patient’s bite—whether that’s good or bad. Granted, some dentists actually do upper and lower models with a good bite registration. That will produce a better appliance. Some do a face bow mounting and might even capture an existing canted frontal occlusal plane—and that’s a critical step. How about additional details? Does the patient snore? Is there a possibility of sleep apnea? If so, you’re into an entirely different area that I will discuss in a separate posting. Does the patient’s jaw lock closed or is the jaw seemingly out of place to either right or left side in the morning? Are some teeth periodontally involved—better keep the pressure off of those! Is there already an anterior open bite, perhaps after NTI use? All of these factors go into designing the appropriate night appliance for each person. 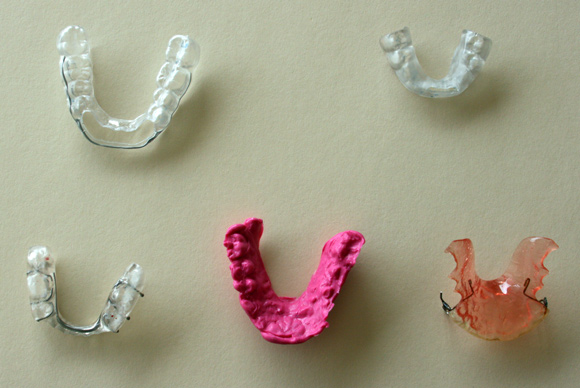 The seemingly easy, almost brainless (Sorry; *almost* may be the wrong word) technique of making a night guard is much more complicated than you’ve been led to believe. I have many examples of design, technique and procedures for the fabrication of night guards. I could provide you with photos and step by step instructions in an eBook. Night guards can be easily and quickly done, although thought and care have to be given to the task. I can show you how. If there is sufficient interest I will write and publish my material complete with photos. If you are interested, please let me know.