Although I have been providing care for patients suffering with varying degrees of TMD for the past 15 years, and have explained thousands of times the ins and outs of oral appliance wear and always thought myself a rather empathetic person, I couldn’t really know what our patients were experiencing.

Then about three months ago after a rough drive on a rutted, rock strewn, dirt and gravel road close to Ocotillo Wells (Anza Borrego Desert State Park) I got back on pavement and found I couldn’t get my back teeth together. Holy open lock!

Well not really open lock. I’ve seen a few of those, the condyles stuck out in front of the articular eminence. I was just not able to close fully. And everything hurt especially my masseter muscles and temporomandibular joints. My temporalis muscles weren’t too happy either.

Back at our campsite I had a heck of a time eating dinner. Just try eating when even attempting close brings on intense pain.

The next morning I was at least able to eat a little muesli; the jaws ached but the back teeth touched, at least on one side.

I did what most guys would do in this situation: I ignored the whole thing figuring the problem would go away. After all, how much trauma was really involved in that drive on a rocky road?

A few days later, with no particular aggravation, I locked partway open again. And again the next day it seemed a bit better. Two days later I had pain and inability to eat again.

In the past I’ve used x-rays of my own temporomandibular joints as an example of normal. Not now. Joint images showed a posterior displacement of the left mandibular condyle.

I had also used T-scans of my own occlusion as an example of near perfection: All teeth contacted at the same time upon closing with right and left back teeth hitting with almost perfectly even force, no more than 2% off.

Now my bite was really off. Even on days when I could at least get my back teeth together at all, T-scan showed that 70% of the biting force was on the left side, 30% on the right. Not exactly textbook perfection of occlusion.

Dr. Linda sat down with me and we had the same conversation I’ve had with patients a thousand times before. “You’ve displaced the left side of your mandible back toward the ear and it will need to be stabilized with oral appliances both day and night for a period of time, probably about 12 weeks,” she told me.

I already had a sleep appliance (mandibular advanced device for snoring/sleep apnea) that I wore at least some of the time. Linda did impressions and bite registration to capture the correct condylar position. A week later, I had a daytime orthotic.

Patients have told me dozens if not hundreds of times just after delivery of a day orthotic, “Oh, that feels weird.” Good word for it. It did feel weird. However, I could close on the thing without pain. I simply felt as though my back teeth contacted too soon, as if my bottom back teeth were suddenly too tall. 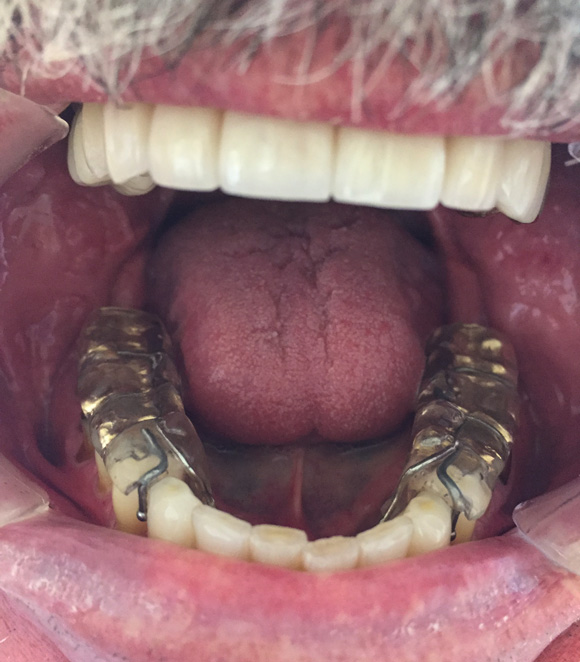 My patient’s experience with eating with the orthotic in place has varied with some complaining they simply can’t eat with the device to others eating everything they wanted including foods I would never recommend, nuts, double burgers, pizza crust, jelly beans.

I happened to be able to eat almost anything. Within an hour of getting my day appliance fitted I tackled a carnitas torta, basically a thick sandwich with lightly toasted bread. Although I used a knife and fork instead of trying to bite into it, I had little or no difficulty. Chewing felt a bit unnatural, but I was certainly able to do it without much difficulty. When I deliver a new day orthotic I tell people to be very patient with eating and advise them to stick with very soft food for a week or so. Frankly, I may not need to encourage quite so much caution. In future I may say, “If you can eat it, go for it!”

Some have hurt themselves on French bread and hard candies, however.

After one week of daytime appliance wear, Dr. Lukacs checked things out. My masseters were still a little sore but the most painful area was the left temporal tendon. She applied low level laser therapy to that area for a few minutes and used electrotherapeutic point stimulation (ETPS 1000) on the masseter muscles. The occlusion on the appliance was slightly off and she adjusted the bite and tightened the appliance on both sides.

During that first week I had no locking, no problem with closing whatsoever. There was no masseter pain with chewing. Yes, Dr. Lukacs elicited pain in the masseters when she pressed on them, but I would not have said they were uncomfortable day to day.

A week later the pain in the masseters and temporal tendon was gone, even when palpated. No therapy needed. She tightened the appliance and again adjusted the bite.

I know that some of my patients clench on their appliances during the day; that’s certainly not a recipe for calming tight muscles. In my own case I never clenched on the day appliance although there were times that I played with it. That is, I closed lightly just testing: now where is my new bite. Okay; let’s try that some more. Oh, and is it loose? Let me try lifting it with my tongue.

My own patients must have that kind of internal dialogue many times throughout the day. I understand that now.

Am I completely compliant? Not a bit. I often take my day appliance out when talking with patients even though Dr. Lukacs says she can’t even tell whether I have it in or not—my speech seems quite unaffected. To my own ear though it seems that my S words still come out slushy. I have to bear in mind what I tell my own patients: you’ll always sound different to yourself, but you won’t sound so bad to others.

Be that as it may, one of our patients, a well-dressed attorney, told me today that someone asked if he’d had his tongue pierced. Dude!

I tell my own patients to expect about 12 weeks for a displaced temporomandibular joint to stabilize. I find that’s usually a good estimate. But I had my wife take new joint films at about the 2 week mark without my appliance in place. Not quite perfect yet, but the joints were certainly in better alignment. And my occlusion, grossly off two weeks before, was now nearly back to its usual near perfect right to left pressure.

I suspect that it is because mine was an acute injury having occurred only weeks before treatment was started. You may well ask whether I would have improved without treatment or perhaps with physical therapy instead of appliance therapy, and I think that is a reasonable question.

But with the left mandibular condyle clearly out of place and bite very unbalanced I think the best course was to do the appliance in just the way we did. It has certainly worked well.

We often have our patients begin a process of weaning off the day appliance at around 12 weeks. I have only been wearing my appliance for 3 weeks now. When I remove my day appliance I can tell that my bite is still somewhat off. When I put the appliance back in my teeth meet evenly and solidly. I believe I’ll be ready to wean off the day orthotic well before that 12 week mark, but I won’t rush it.

My jaws and bite are much improved and I’ll try to follow the same instructions we give our patients. I won’t pretend that the most valuable part of the experience is the degree of empathy I’ve gained—that is admittedly a secondary benefit on top of being able to bite down without hurting myself!

But I do have a greater understanding and appreciation for what our patients go through. My good fortune was starting treatment as early as I did. Most of our patients have been suffering jaw problems for years or even decades. Their joints can never be expected to stabilize as quickly or as easily as mine have.