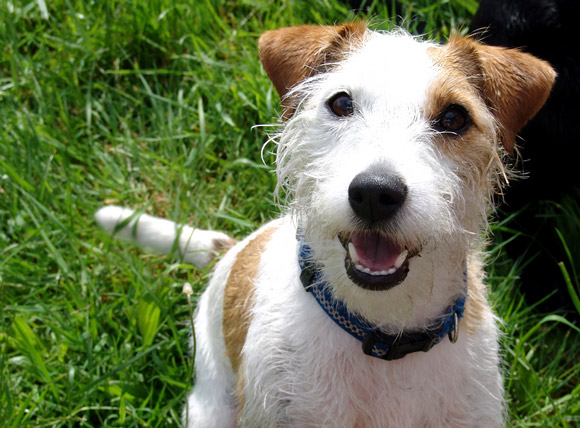 Canine teeth are for tearing—these teeth are really useful for eating raw meat. Wolves and foxes dine on raw venison and squirrels and bunnies so they certainly find these teeth instrumental. And these sharp and pointy teeth were very useful for us humans too when we hunted wild beasts, especially when we hadn’t yet mastered the tenderizing effect of fire.

But it would seem that the ability to rip and tear would not be needed for most meals in modern times.

Still God or nature or evolution must have had something else in mind for those long rooted eye-teeth. The canines, or cuspids, are actually capable of protecting the back teeth from lateral forces, in fact they appear to be designed to keep powerful side to side forces off the posterior teeth–and they are good at it. IF…if they have erupted into proper position and are not badly worn.

One way to appreciate the usefulness of cuspids is to notice what happens to people who don’t have them; or have them but not in their proper places or badly worn so that they might as well be gone.

It turns out that not having working cuspids can wreak all kinds of havoc.

“Is your patient breaking back teeth? Look at the cuspids!” ~ Dr. Ron Jackson

Allow me to tell you about a lady named Jackie who has canine teeth that never erupted properly so that they might as well be missing. Does it matter? And if it matters, just how much? In short, why have canines if we’re not dogs?

Below is a T-scan of Jackie’s bite when she closes in C.O. (her habitual closing position). Don’t be nervous if you’re unfamiliar with the technology. In simple terms, T-scan is just a representation of the upper arch, complete with tooth numbers and ink spots that would correspond with your articulation paper marks. Now, T-scan does much more, or course, including how hard each tooth hits and even in what sequence, but let’s not over-complicate this. Just pretend these are articulation paper marks and that you’ve had your patient Tap-Tap on carbon paper right, left and center.

Here’s the result. You can see that she has even occlusion on her back teeth—not bad, right? Well, obviously, there is a problem: none of the anterior teeth touch at all. Whether from a tongue thrust habit or simply abnormal growth and development, the lever that is her jaw puts full force on back teeth but nothing up front. Might that cause problems when chewing? Might that cause trouble if she does any nighttime grinding? Let’s see.

Here’s a T-scan of Jackie’s bite when she is functioning on the right side.

Most of the contact or force is on #3. You can see that there is also contact on the last molar on the left side—though that pressure is not as great as the interference in the right side. Cuspid protected occlusion? Not exactly. In fact the right first molar is pretending to be a cuspid and it’s not very good at it. Number 3 has a PFM crown that was done a couple of years ago after the tooth fractured. Now, the porcelain on the crown is also cracking. According to Jackie’s dentist, the buccal cusps broke off when the tooth fractured. If you’ve been practicing dentistry for awhile, you’ve seen that more than once. But isn’t it at least a little puzzling? Those aren’t even the functioning cusps. Why would they break?

Jackie has immaculate hygiene and probe scores are normal almost everywhere—except around #3. She has a 6 mm periodontal defect there. X-rays show horizontal bone loss but in one place only: around the two upper right molars.

And why was she referred to a TMJ practice anyway? Pain!

Right side masseter and temporalis pain, right side temporal tendon pain and ligament pain. Typical TMD symptoms. But her joint x-rays show condyles nicely at home in the glenoid fossae and there are no unusual joint noises on opening and closing. She has normal range of motion. The pain in the muscles of mastication and associated tendons and ligaments is caused by excessive force on the right side back teeth in right and left function.

Do you remember that old story or poem, For Want of a Nail? For want of a nail the horseshoe was lost and then the horse and rider were lost and the Battle of Bosworth lost and King Richard III killed—I think that’s Shakespeare.

But what about for want of a lowly canine tooth on the right side? For want of a functioning canine Jackie may lose both upper right molars. And in addition, for want of a canine, Jackie is taking pain pills and an SSRI anti-depressant daily, not because she’s depressed, but because it helps with her pain.

So please look at your patient’s cuspids. When your patient slides right and left do the canines cause the back teeth to separate? Your patient just broke the lingual cusp off a lower molar? Yep; you get to do a crown. But stop and think a moment: the lingual of the lower molars isn’t where the action is. Those cusps shouldn’t even touch when your patient grinds. Why would that part of the tooth break? Maybe the tooth that broke wasn’t weak. Maybe the canines weren’t doing their job. Look at the canines. Look carefully. If there is not immediate disclusion of posterior teeth upon lateral movement, i.e. cuspid rise, the problem should be corrected either with orthodontics or restorative dentistry.